With power distribution accessories, so that the higher high end classes are, the less they hear. This effect can be achieved in two ways – through an advanced filtration, regeneration and other complex processes, and by the greatest possible simplification and minimalist design. For obvious reasons, the first method provides incomparably cleaner AC and all kinds of security, however, is inextricably bound up with the high cost of production and hence the high price you will pay. The members of this group can include most of the AC power conditioners and AC distributions of less or more complex filtering. The idea of ​​minimalist, through its purism, is limited to the (re) distribution of electricity to more than allowed by the standard, even double AC inlet, the number of receivers and at least in theory, it is definitely cheaper for the end solution.

The AC distribution board which is the object of this test Amare Musica Silver Passive Power Station, as its name suggests to classify the representatives of the minimalist trend. My above assumptions confirmed its designers and engineers – Maciej Lenar and Marcin Sołowiow, who with disarming frankness admitted that in addition to providing individual solid-core silver individually distributed current to each of the six slots in the middle is only very narrowly selected … audiophile air. Thus, when the producers let myself be sincere I’ll try to give back to them the same – SPPS (short for Silver Passive Power Station) is one of the most beautiful AC power distribution boards that I was able to see so far. Ba, its performance is such that even a shame to hide it behind a table with the hardware, which usually end up this type of accessories. It is hardly surprising with the rest, because, like the other devices Amare Musica was founded first as a purely virtual existence in the Solidworks and only after many providers preview renders any angle started to produce. 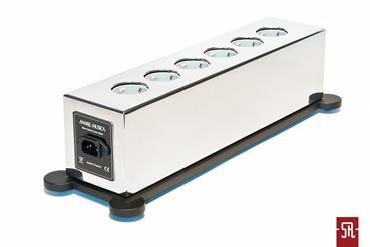 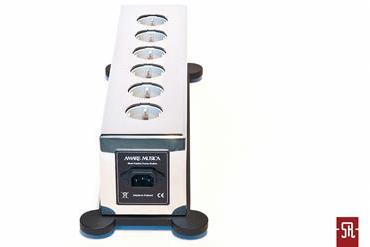 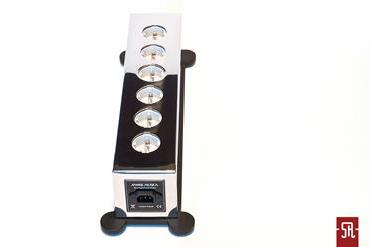 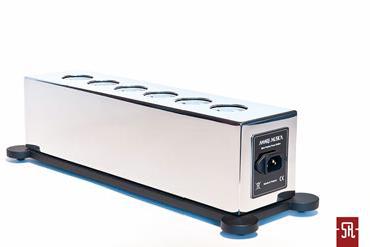 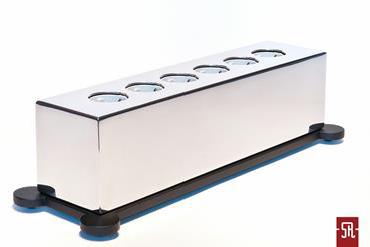 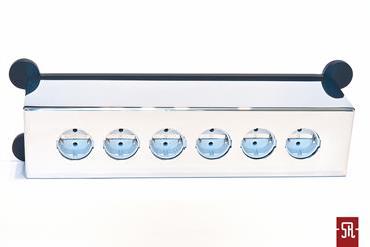 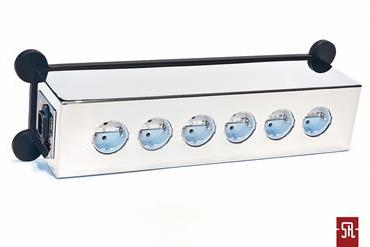 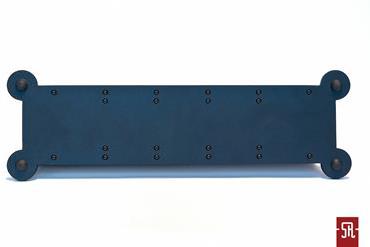 The use of stainless steel enclosures possible to obtain a very smooth, almost mirror surface, which on request can be coated with paint in virtually any color. Painted version of whatever color, black-one-centimeter-thick bottom plate fitted with rubber feet that can be replaced after removing the spikes, not only provides stability, but also protects the whole front of the micro-vibrations. From the ergonomically and usability I have to mention about arrangement outlets. While their quality and the distance between them in the use of standard connectors and even audiophile such as Furutech or Oyaide do not have any objections to a perpendicular position to the axis of axle outlets distribution board if you need to connect the cube power outlets that can be found for example in DAC’s , streamers and phonostages this task may be so daring that the adjacent one of AC outlet will unfortunately have to remain empty.

But let’s cover the impact of SPPS to the sound of my system. In order to fully determine its efficiency separate climbing in it not only reasonable when it comes to energy consumption integrin in the style of Peachtree Audio, or ECI, but being able to give 300W at 4 ohms mono power Restek Extract. When it comes to stereotypes attributed to the silver trim sound is immediately want to point out that no such noted. Although the lower bass was audible, but full of culture and charm brought a degree, or a half up, but nothing more. Although „Metallic Spheres” duo The Orb assisted by David Gilmour did not bring back a dangerous calling ancestral „shells” in located in the living room sideboard, a significant more culturally and „polishing” have been subjected to both the diameter and the highest tones. Gilmour’s guitar cut the air like a great sword Jedi offers a warm, soothing color and race nerves shattered daily. It is worth noting that these changes have not brought with them reducing the resolution, or trim the top of the band. The above observation also made the quite intensively-operating wind brass instruments album „Brotherhood Of Brass” Frank London’s Klezmer Brass Allstars, where a variety of reverbs and nuances shimmered with thousands of shades and colors not wounded by the listener’s ears. I got the same impression when listening to a few CDs (including samplers) signed logo Stockfish Records, and our Anna Maria Jopek („Whispering”) in the lead role where we have lots of whispers etc. Instead of sensations similar to those associated with the removal of tartar it sounded more smooth, creamy and sweet. What has so far been slightly smoothed annoyed, without harshness and clinical coldness to almost caramel musicality.

From the above description it is clear enough, or at least I hope that the power distribution board from Amare Musica Silver Passive Power Station is not completely transparent, it leaves its imprint on the sound system that supplies the life-giving power. It is obvious departure from the idea of ​​complete transparency of individual pieces of audio gear, but … at this point we come to a secret public knowledge, which very often forgotten. We are talking about the painful truth audiophile fidelity – the better the system we have, the less you can be listening to your (sometimes worse released) music. Of course, the music is still our favorite rings are great, but mistakes or imperfections realizing they can spoil all the fun of listening. SPPS is a kind of cure-all for the above ailments – leaving all the best civilized and make your way to beautify these aspects, which are in the process of recording, mastering or not fully worked out. When asked whether the idea of ​​the sound check for a specific system, you must answer for themselves. Just rent a strip, plug in to it has a set of audio and listen quietly for a day or two. Otherwise, you can not.

Text and photos by Marcin Olszewski 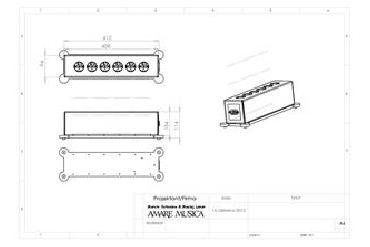 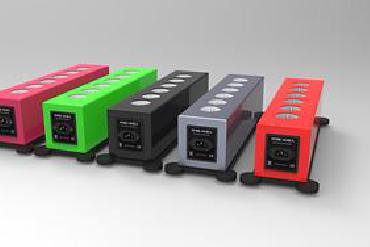 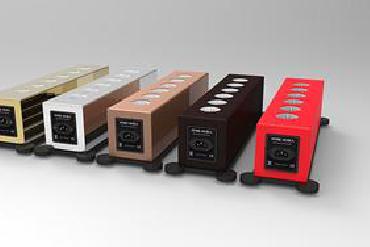 At the moment, I can safely do without additional distribution boards. With a person supply line from the AC power meter to the equipment room, fitted a two tripled wall outlets. The planned expansion of the system of „musician” files, forcing adding a few holes with the flow. Fortunately, this is not the case for yesterday (I’m hardcore LP-freak), so quietly accepted the offer to test the power distribution board. It will bring – not make changes, worse – it will improve the sound, see, can hear.

I just got something that some people would put in the house for the sake of appearance. AMARE MUSICA SILVER POWER STATION PASSIVE outside looks rich, and even feed the designers do not regret. The interior of the AC distri board, which guides the silver in the form of solid-core wire. That six-outlets „station” is quite large elongated solid weight, polished block and looks phenomenal – the wife acceptance guaranteed. If someone likes the ascetic finishes may deem it unnecessary glare. But the taste is not discussed. 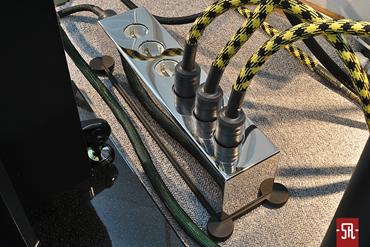 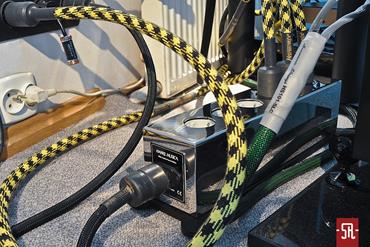 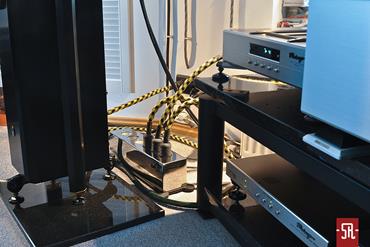 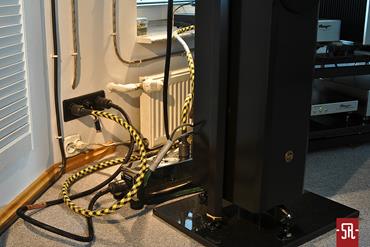 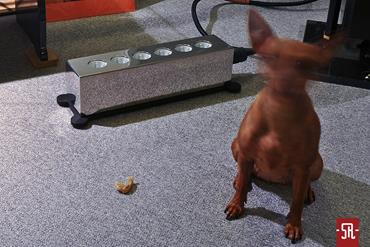 Overall verified experimentally by the majority of the industry rule is: power amplifier connected is always from wall. But I could not take a shortcut and put everything to the test sboard. Unfortunately in my case was the top of an old truth, but I read that sometimes different. Why for me is the impact, I do not know. It can not get worse, but definitely different than I expected (I probably poorly constructed device). With two outlet store checked several combinations, but only when you connect the tip to the wall, the system began to sing. So start as recommended by the constructor of my unit, Mr. Kazuo Kiuchi. The man knows what he says. Releasing the title „AMSPPS” of the power consumption of 35-year-pound of 1KV transformer amp, the sound came to life, take in air and freedom. Such a variant of the remaining time.

Often, first impressions indicate the general nature of the changes. Do you go in the right or wrong direction turns out to be longer listening. Unfortunately, I have to say that the power station is not transparent. In theory, most will take this as a disadvantage, but different systems need different stimuli approximating to nirvana. And do not laugh at this. I’ve heard some sets in my life (supposedly finite), in which a change of one element (and so is the heroine meeting) change the being the owner, it can be different, and this is sometimes better. I’m not saying that this is the way to Tune-up sound. However, one should take into account the potential impact.

First of all, want to point out that the effects of this game are not comparable with the exchange speakers. Do not write a dissertation on five columns, because I always try to say something, then I can put the stamp with your name. I got a trivial way, some-Outlet splitter, once commonly referred to as simple distribution boards form markets. What can you come up with. However, the words that come to mind after a few days of use, read: smooth and rounded edges of the light spectrum. No fouling, only tempering irritating sibilance in vocals and midrange smoothing, which results in a reduction charshness media. The music flows without special tension in the analysis. Sunk back in his chair, I run the play and drifting. My babydoll with transistor began to play closer to the aesthetics of tube amplification. All aspects of the presentation stage, stereophony, depth and location of the virtual sources without affecting the product remained his AMARE MUSICA. The only consequence of the marriage (for many it will be a positive), is to reduce contours and as I mentioned earlier, the overall smoothness. The game more spots, but without merging the musicians on stage. Nobody pushes a neighbor for a seat. It’s just a different way of processing the signal recorded on the media. The bass is a little more boxes than strings, trumpet has less tin, more mellow character, but the saxophone is in 7 heaven. Listening absorbs a whole, without carving the various instruments. Suddenly we find that we listen to music, not the musicians.

I realize that there are vacuum tube sets cutting space between the speakers as razor blades, on the other hand tend to be thick and warm sounding semiconductor products. Therefore, I suggest even extras such as a power SILVER PASSIVE POWER STATION, connected to the test before buying. If reception music will suffer after such marriage, looking for something from another stall, or appreciate a hole in the wall for additional outlet.

The system used in the test, a complete set of Combak Corporation.