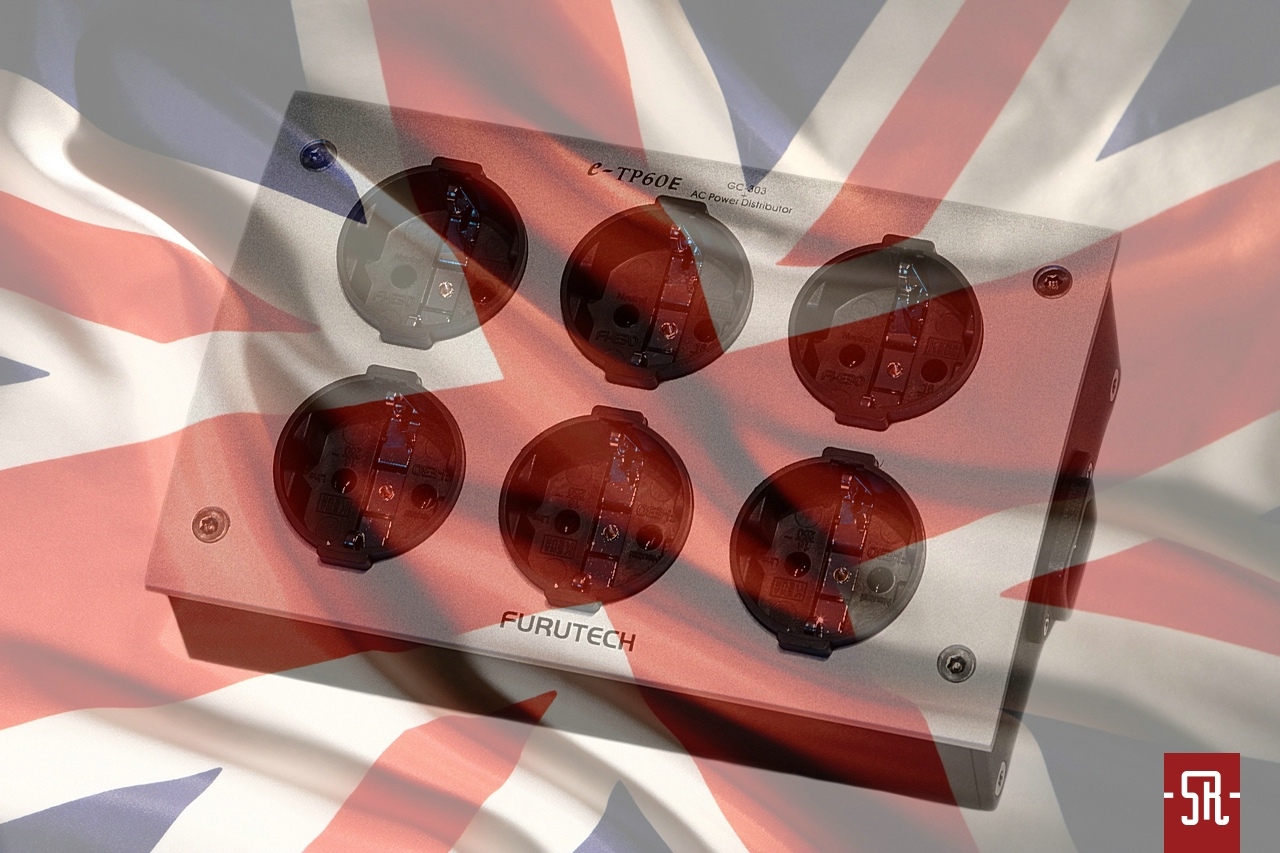 Although it is absolutely clear, that the profile of our web portal encompasses strictly high-end items, yet from time to time we allow ourselves some slack, remove our ties and reach out for devices on a much more affordable price level. But to allow them to appear here, such devices must have something magical in them, something what would intrigue us, what would draw our attention and finally something that will allow them to pass tests in our systems, to compete successfully against any, sometimes much pricier, competition. This happened with, for example, the Polish amplifier Egg-Shell Prestige 9WST, the Japanese Leben CS-300F, or the lately tested Auralic Aries Mini. Here we have a bit of a disconnect, as how could we propose, how could we suggest other elements of the sound path while not being accused of unrealistic approach, and on the other hand to not to make too much of a misalliance. The above is also true in case of any anti-vibration accessories or power related devices, which should not be ignored, as our tests showed many times over. Although we managed to avoid this issue with supports and platforms, it was much worse with conditioners and power strips, as there were not many which were also nicely priced. So to avoid any anxieties or laugh outbursts we would like to be able to propose something more adequately priced instead of the Furutech Pure Power 6 costing hefty 40 000 zlotys. So we decided to take the risk and find out, what we can have from the lowest parts of the Furutech catalogue and ordered for testing the TP60ER, a limited version of the cheapest, and at the same time most popular power strip e-TP60E. 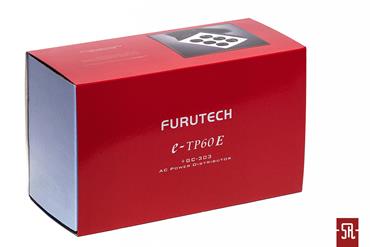 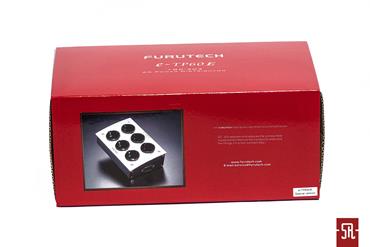 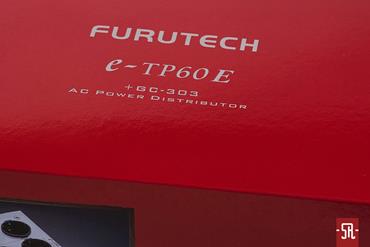 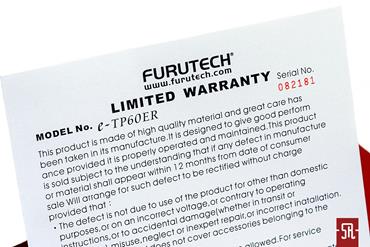 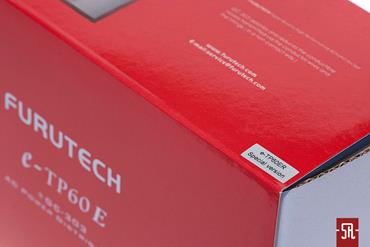 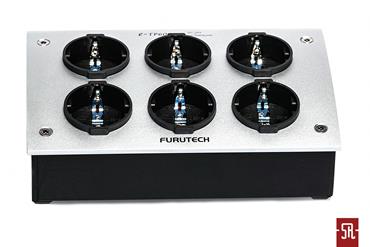 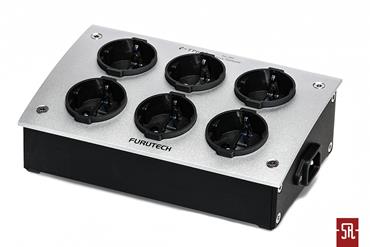 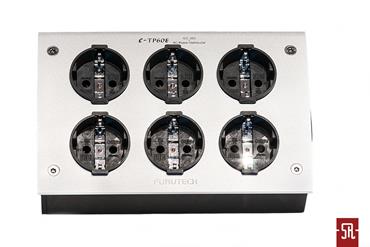 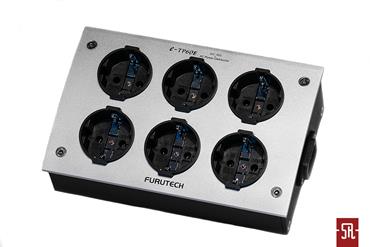 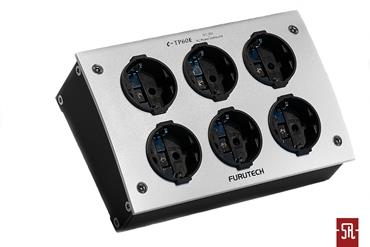 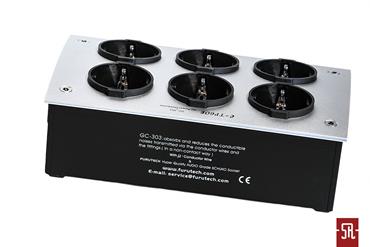 Already on the shelf in the shop the 60 attracts attention with an intriguing and elegant red cardboard box, what already gives a few extra points to the Japanese contender, as the competition seems to stick with shades of grey. It gets much more toned down once you remove the cardboard, however we started to think, if that what we found inside the box is really the product we asked for. True, true – the limited version of the basic strip is not even “slim fit” category, in terms of weight, but even very “skinny”. However a quick look in the vast void of the Internet confirmed, that the weight should not come as a surprise, as the top is made from light aluminum profiles – which is at the top of a black anodized chassis containing inside only solid-core wiring, which goes from the input IEC socket to the six Schuko output sockets. So 0.94 kg is really what it should be. The manufacturer also provided rubber feet to prevent the strip from running away over the floor.
As you could expect from a typical audiophile gear manufacturer, in the 60 there are some truly proprietary solutions, and I would like to start with the mysterious technology using the “Formula GC-303” material for covering all connections and internal surfaces of the cabinet to eliminate all electromagnetic wave, which could exist there. Compared to the standard version of the strip the manufacturer used different cabling instead of the 14 AWG wires – the manufacturer only mentions usage of “different” wiring with higher diameter – and instead of the FI-E30 G sockets with gold-plated connectors from phosphor-bronze their upgraded, rhodium plated (R) version, capable of working with loads up to 1850W.
Of course the two-stage cryogenic treatment was also employed (with cooling at -196 and -250 °C) as well as de-magnetizing (2-step Cryogenic and Demagnetizing Alpha Process).
Enough of the technicalities and general impressions; let us start listening. However taking into account, that the Katowice based RCM supplies a completely new item, I needed to spend some time to burn it in, and at the same time test my patience. Fortunately at the time of this test I had also the monoblocks Electrocompaniet AW-180M with the dedicated preamplifier EC 4.8 and the stereo poweramp Emotiva XPA-2 Gen 2 for testing. So I was able to pass some current through the Furutech. So after the burn-in period completed I started listening.

I will not dispute the influence of the Furutech as it was, as I think, that some obvious items do not need to be discussed, and if someone does not believe that such a device may influence sound, then such people can just happily listen to a ghetto-blaster or similar unit, and the money they saved use to buy some garden utensils. However if we can hear this influence, then we should try to describe it, in a more or less concise way. So what does the Furutech do? Well, first of all, it distributes, divides current between the devices plugged into it, and already at first “hear” you can say, it does its job very well. Not only that we do not perceive any loss of dynamics, something that usually is described as slowing down or mudding of the sound, but we even get something extra in the form of breath and vitality of the sound. Maybe it will sound strange and not very believable, especially when looking in the context of the price of the tested power strip, but the Furutech somehow frees the potential of the electronics that is plugged into it. The effect is so intriguing, that at first it may seem, that the whole sounds lighter and more etheric. Nothing could be more wrong. The center of gravity does not move upwards and the bass is not being slimmed, but the extremes of the sound spectrum get broader and bass starts to behave as if would have gone through a Navy Seals conditioning camp. It loses fat and gains speed, motoric and agility, what makes us perceive its kicks as immediate and merciless – harder. Because it was enough to reach for the “Aberrations of the Mind” Morgana Lefay to have true hell break loose in the listening room. Mighty guitar riffs, insane and breathtaking drums and percussion passages by Pelle Akerlind with an almost agonizing growl of Charles Rytkonen showed clearly, that jokes are over. It was similar with the really subsonic piece “Firestarter (Empirion Mix)” The Prodigy. Raw and harsh electronic sounds were based on a mighty and overwhelming bass rhythm, what seemed to be to Furutech’s liking, as it did not try to interfere with the mad rhythms and provided the Norwegian monoblocs with ample energy. I will not hide, that a part of the success was to be attributed to the cable connecting the wall socket to the strip, the Furutech FP-3TS762 equipped with type 50 NCF(R) plugs, but as this combination caused absolutely no anomalies, you may think about such a configuration for your systems. But let us get back to the tested power distributor.
Against concerns, if with such an energetic low end of the frequency spectrum, the so beloved saturation of the midrange does not get lost. Everything is fine there. For sure we cannot talk about the stereotypical “tubey” midrange, but let me be frank – a power strip is being designed not to make anything nicer, or to mask anything, it just should provide power to the electronics connected, and that electronics may do things or not. This is the case here. If a recording is more or less neutral, then it will sound like that, but when the sound engineer decided to “make some magic”, then we will be able to catch that, having the Furutech distributing our power. Let me show you an example – “The Shape of a Broken Heart & Acoustic Sessions” Imany, where the low, slightly matte voice of the vocalist is beautifully enhanced by the shiny guitar riffs and the cymbals, destined to “make a nice climate”. What was important, that the contours of the virtual sources were shown brilliantly as well as the freedom or articulation and that without the irritating underlining of the sibilants. A recording flowing truly from the heart.
I could also find no weakness when assessing how the acoustics of the recording rooms was reproduced. Maybe this is not a rule, but some of the audiophile population resigns from using any kinds of power strips or conditioners, or other accessories improving power, afraid they would lose all this micro-information and nuances. But playing back many times albums like the very “homemade” and focused album “Cantora” Mercedes Sosa, “Cantate Domino”, full of church reverberations or the equally rich in echos and reverbs “A Trace of Grace” Michel Godard showed, that the Furutech would not impair any of those.

So now it is time for a verdict. Can things be done better? No doubt about that – I could just mention the unmatched Pure Power 6, but this one is also priced adequately to its abilities. But it also can be done worse, and there will be many more cases like that, however I will not mention any makes and models here. So how did the tested Furutech e-TP60ER fare in my ears and eyes? I will frankly say, that it did its job unexpectedly well. It is a very truthful and almost unnoticeable, transparent accessory, that could find its place in systems costing even very big amounts of money. How big? We can easily say, that the threshold of 100000 zlotys would not intimidate the 60. You do not believe me? Then I will refer people interested to the review from the last Audiophile in Wrocław event, when in the concert hall of the National Center of Music the e-TP60ER provided power to the split amplification The Preamp / The Poweramp from Einstein Audio Components powering the mighty Odeon No. 38. Do you need a better recommendation? Those who were there at that time heard and believed, those who could not make it, and who are searching for a reasonably priced power distributor with above average qualities have to try for themselves to believe. But if the truthfulness and transparency of the ER version turns out too much and too true for them, as naked truth is not always beautiful, they may reach for the “standard” TP60E. Then it will be warmer, nicer and at the same time a tad cheaper.