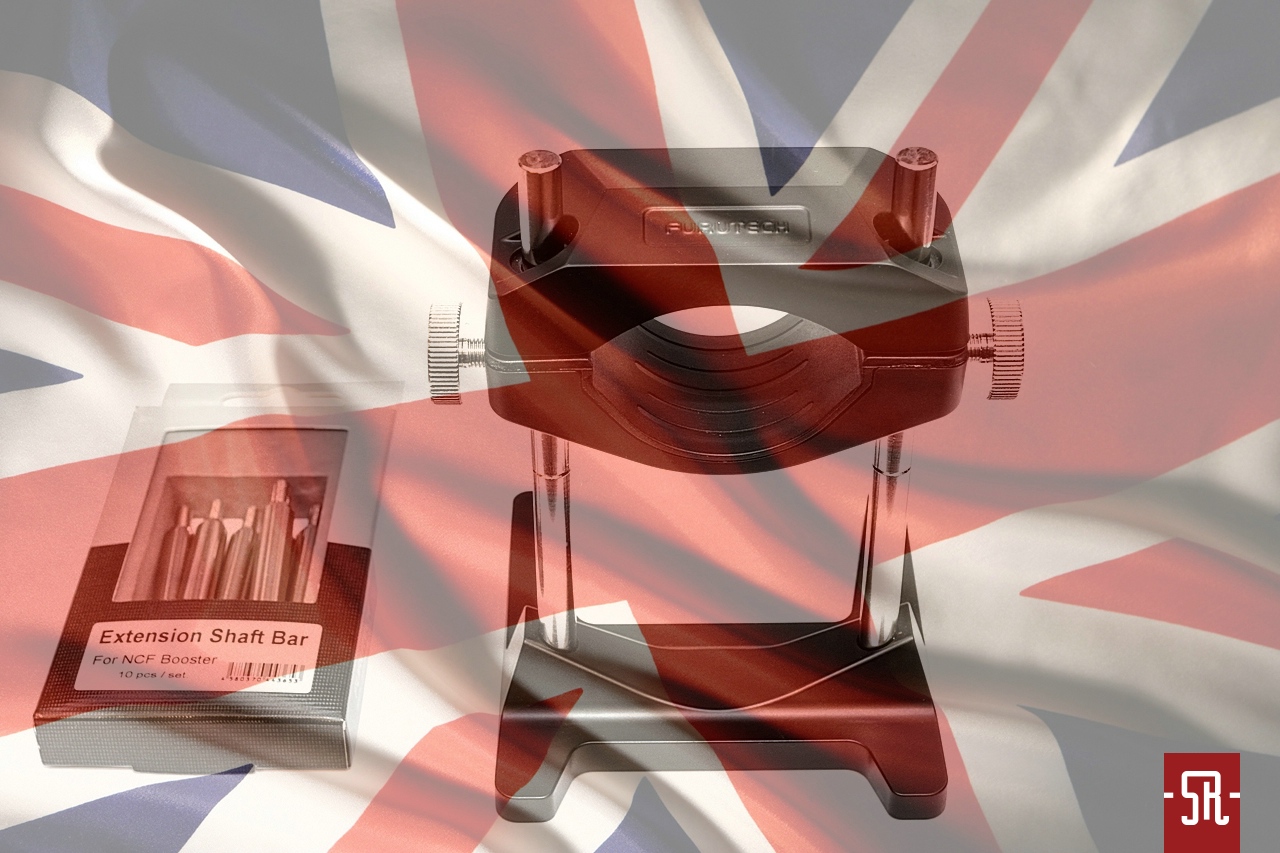 I don’t know how our meeting today will be viewed by followers of theories like: “all digital audio devices sound the same” or “cabling has absolutely no influence on the sound of a device,” but I should now warn the most nervous audio-voodoo hunters before they start to read this text. What is this all about? For me, this is nothing special, as we will be looking this time not at a cable, but at an accessory for a cable application. But what exactly is it? We will be looking at cable supports, because lately some cables have become very heavy and are pulling the sockets out of our walls and devices . Have I lost my mind? I can assure you that before testing this gadget from the distributor in my own system, I thought I had, but, as it often happens, not everything is as obvious as you might think, and after a few days the ironic grin on my face had disappeared and I was positively surprised. Who played this joke on me? Who could it be? It was none other than the world leader in these types of accessories, the very well-known Japanese company, Furutech, which has introduced to the market a device called the NCF Booster, brought to us for testing by the Katowice-based distributor, RCM. 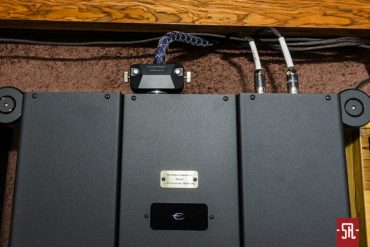 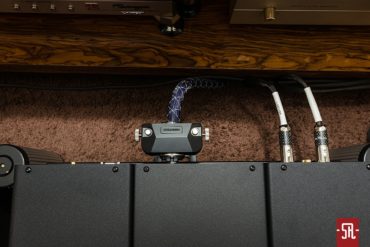 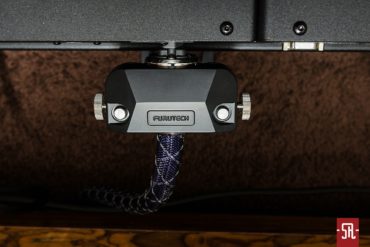 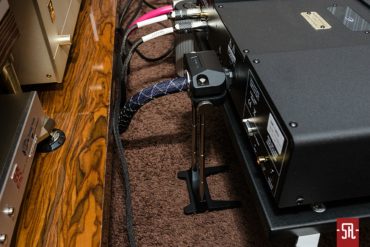 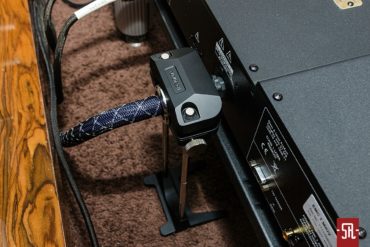 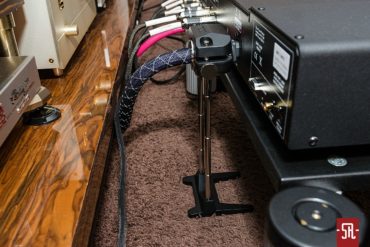 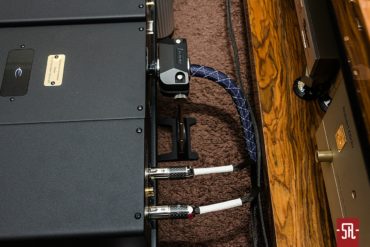 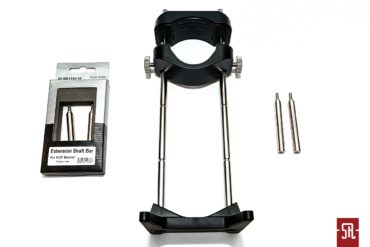 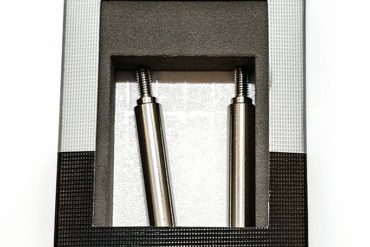 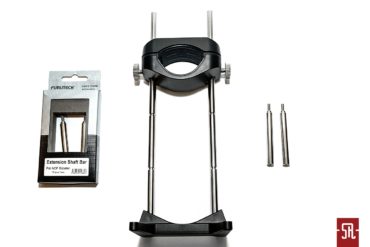 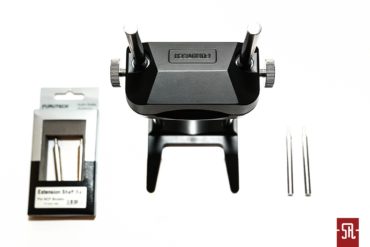 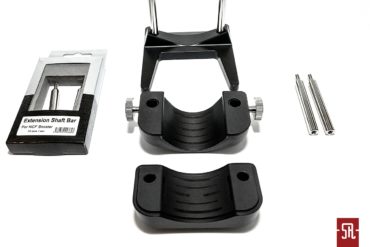 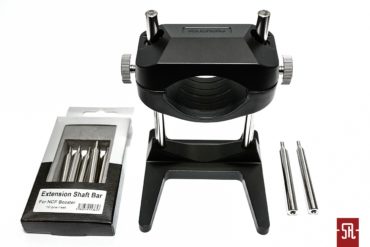 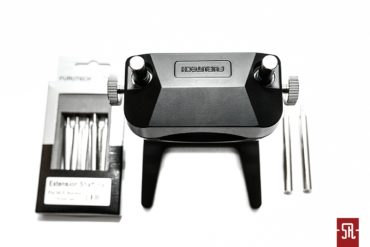 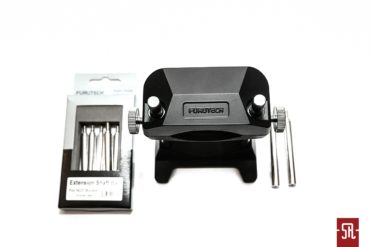 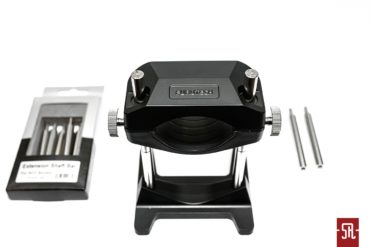 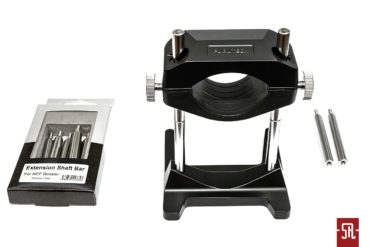 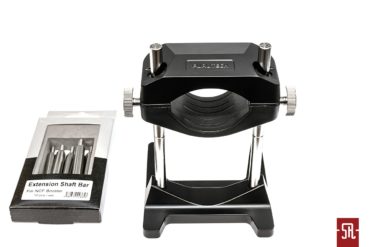 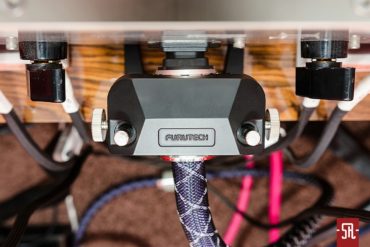 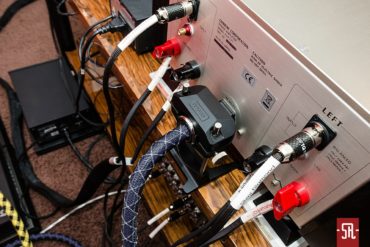 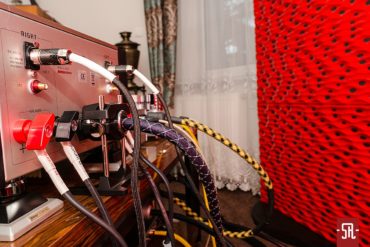 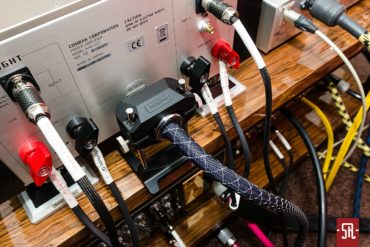 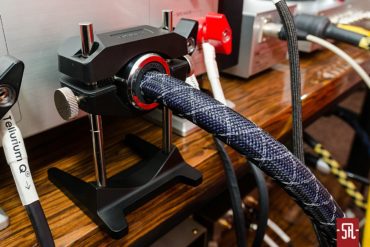 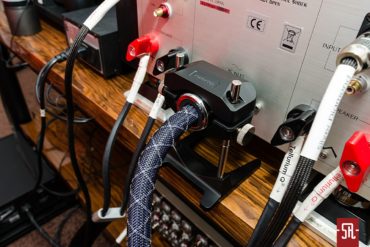 So what is the Furutech NCF Booster? Looking at it from the top, we see something with the shape of a twisted frog with thin legs. When we start to analyze it from the bottom, we see a base that provides a very good and stable support – the company brochure states that it was made from an ABS resin. Looking up along the rods, which enable the use of the device even up to a height of half a meter, we reach the suspension for the supported plug (made from ABS resin and nylon NCF resin used to eliminate static electricity). As you can see in the photos, located on the sides of the cradle are two very important parts , two screws which enable the user to set the height of the gadget and properly secure it. But this is not all – as on the cable, plug or filter, all supported by the unit, we can place a securing clamp. The latter is made from stainless steel combined with nylon NCF resin. The whole structure is held together by two rubber O-rings, which are not essential if you often move the device after installation. If you just assemble it and leave it, then those two rubber O rings will do the job. To finish this descriptive paragraph, I must explain that when you plan to extend the construction beyond what is supplied in the original package, you must order another set of extenders, which are quite easy to put on because the rods are threaded.

What made me want to describe the influence of this gadget on my audio system? You might be wondering, but the impulse for that was surprisingly clear to me, and what is very important is the positive influence it had on the gear placed on the rack between the speakers. Not that I would complain about my own gear, but frankly speaking, whenever my friends visit me, and without taking into account the great music being played, I begin by directing their attention to my concerns, which are really quite trivial, but are still shortcomings. True, this is nitpicking, but when I manage to improve a certain feature, I show it to them during their next visit. So what was achieved with the use of the tested Booster? This is like a blow to the head. In one second, due to the increase of energy in the reverberation of each of the virtual sound sources on the stage, the readability of the sound improves. The back planes, while staying in their place, gain a certain shine, resulting in the ability to use lower volume levels and still hear with the same clarity. But this is not all that the tested accessory brings to the sound. This clarity is not the result of an improvement of the contours of the instruments by a detrimental thinning of the sound, but instead by the increase in the mass of each of them, and not thickening of the edges. It is just that each phrase is juicier, but still within the boundaries created by the system earlier. Impossible? I didn’t want to believe it at first, but a few tests with music containing excessively heavy bass confirmed the effect I have just described. Is there any catch to it? I do not know if you can describe it this way, as this will depend on the system, the expectations of the listener and the repertoire. It concerns the effect achieved by using additional Furutech supports. Each additional Booster increases the effect in an almost geometrical way. In my system, using a second support was like putting a bit too much icing on the cake. Can I be any clearer? As I mentioned, using the Booster improves the readability of the sound with a very positive reception of its increased energy and contour. But unfortunately, or fortunately, another support placed in front of the line preamplifier almost doubles (more or less) this influence, so listening to quiet music, based on the long decay of the piano sounds or vocals in a church, results in a shortening of the decay time, which translates into a few milliseconds of the sound being lost from its inter-loudspeaker life. This did not happen due to the sound being cut, but knowing the repertoire by heart, I heard the minimal loss of ethereality (it became too blunt) as well as its bearing capability (you could hear something like a cut). But, I would like to remind you that my system, and the music I always play through it, always creates such a romantic atmosphere, that it was easy for me to notice such things. Any other representative of homo sapiens may not even notice it, but those who listen to the strong rhythm of rock, or electronic music, will double their donations to charity after hearing the increase of energy in my Japanese system. Although I used two supports when listening to heavy metal, because I listen mostly to audiophile music, the buying decision only concerned one unit. And, please believe me, I am absolutely not joking. This is the second issue which does not make it easy to classify the increase in the number of those supports. What else can I say? Frankly speaking, I could speak about it for a few more pages, but it’s best to leave it at that.

If somebody knows me, not even personally, but through my writing, then they know that I do not give praise so easily. This naturally suggests that when such gadgets appear, and when they are in some aspect surprising, then there is only one more small step to trap this audiophile and then those things end up in my system. This is also what happened to the Booster. Why it includes only one unit should be clear after reading my text. But you should, as you do not know what will happen when you double the units in your system, ask the distributor to provide you with two pieces for testing. This will cost you nothing, and there is a chance that the system, and the music itself, will be grateful for this doubled effect. To conclude this test, I have one more thing to say which is very important from the point of view of those people who might be interested in this accessory. The influence of the Booster is not only on the NCF family of plugs by Furutech (although in this case the influence will be most visible), but it works with all kinds of plugs, regardless of their manufacturer or the material they were made from. And this, combined with the ease of borrowing items from the distributor for a deposit (or if you know them well – even without a deposit), allows you to test this quite inexpensive device, compared to the cables, and verify for yourself whether what I have written is true. I do not know how this will end, but, rest assured, you will have lots of fun.