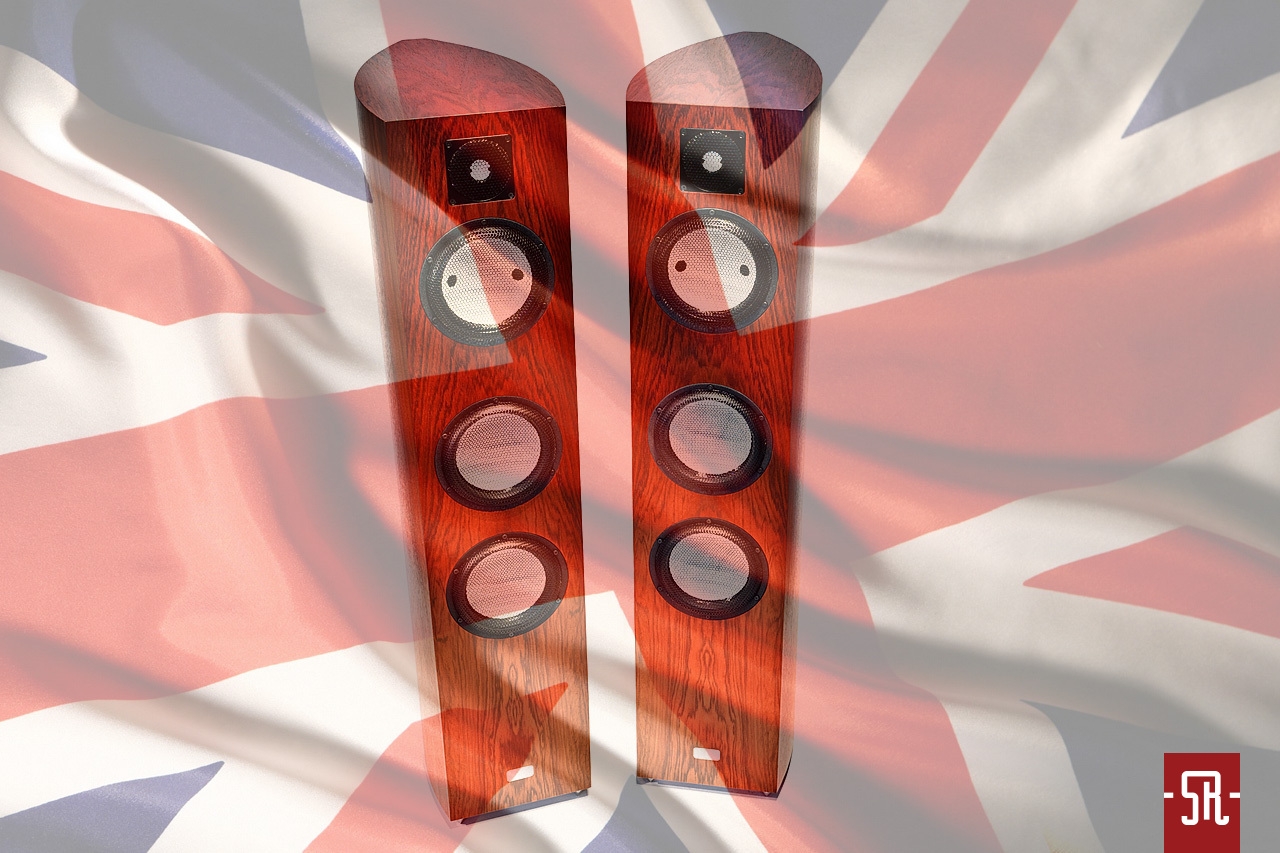 For audiophiles, who are current with things happening, the brand Gauder Akustik is a clear continuation of the German company Isophon, existing on the market since 1929. However I think that for people currently entering the wonderful world of sound, a brief introduction to its history would be worthwhile. So we need to go back till 1924, when two serious gentlemen, working in General Electric, Mr. Chester W. Rice and Mr. Edward Washburn Kellogg designed and patented the electroacoustic transducer, which was introduced to market in 1926 in the form of a 1W radio costing 250$ (in current dollars it would be around 3000 USD). It did not take long before competition appeared, and already in 1929, in Berlin, three young engineers (Herman Rummel, Ewald Fritz and Willi Schongs) founded the company Isophon (then called E. Fritz & Co. GMBH). The company gained attention already in 1935, when their showed their two way loudspeakers equipped with a 12” bass driver and a 2” tweeter connected through a cross-over. It took some time before a three-way loudspeaker was produced, but in the 60-ties it happened, and the model HSB 30/8 were so popular and appealing to customers as well as regarded by the branch, that they were awarded as “The best loudspeakers in Germany in 1969.” 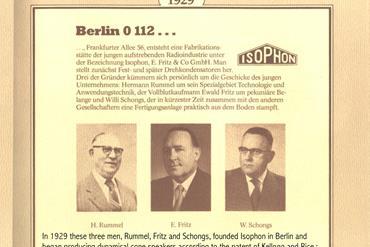 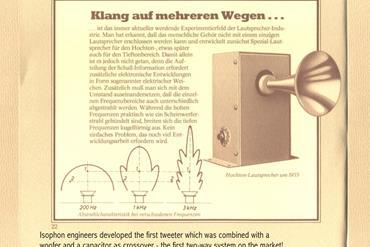 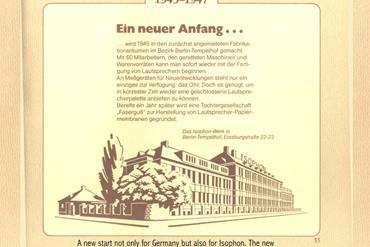 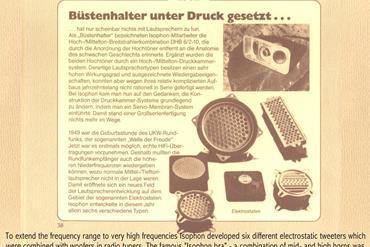 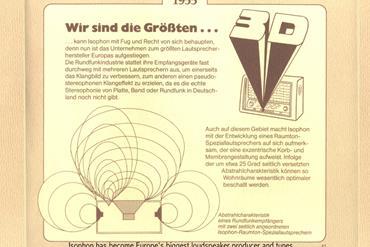 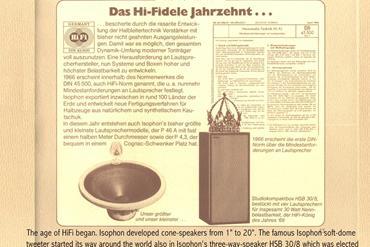 In the 70-ties a well taken chance was the entrance in the automotive market as suppliers of car-audio for German car manufacturers. In 1980 this part of the business was sold to Thompson. But for the ‘golden eared’ most interesting would be the present, and that although the parent company went out of business in 2012, still, from 2013, the audiophile products continue to be made under the name given by Dr. Roland Gauder, who was responsible for research and design of many times awarded and very well regarded loudspeaker in the parent brand.
For today’s standards, such a ‘CV’ points to almost antique roots, but when you dig around, there are even more interesting ‘dinosaurs’ to be found. I will just mention the French company Cabasse, which despite the official founding date (1950), does not forget to mention, that their ancestors stated to manufacture “audio gear” as early as 1780, those devices being violas, violins or guitars. But let us return to the present for good and have a look at the tested loudspeakers – the Gauder Cassiano. 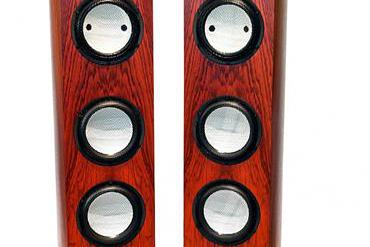 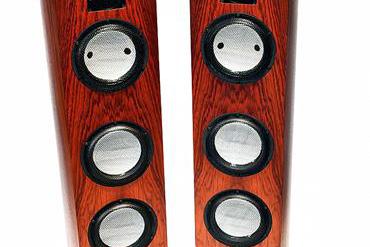 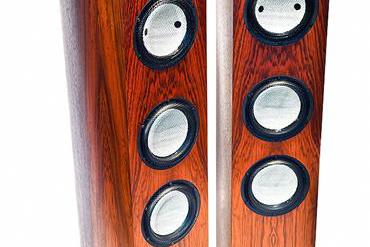 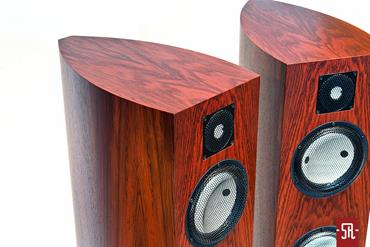 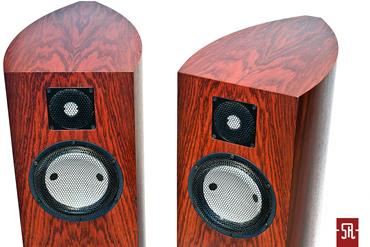 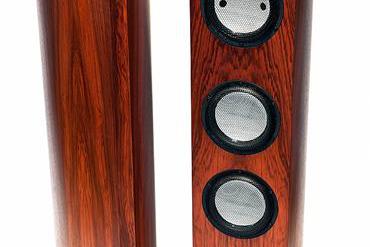 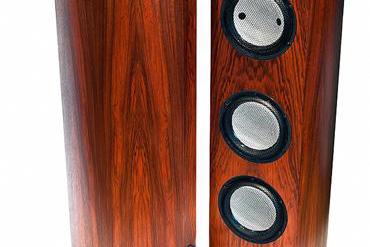 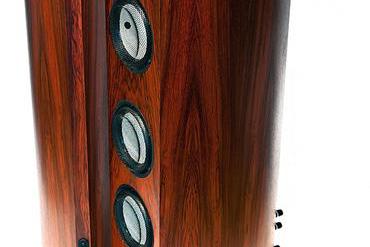 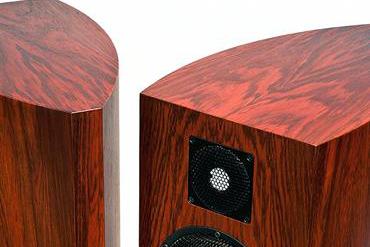 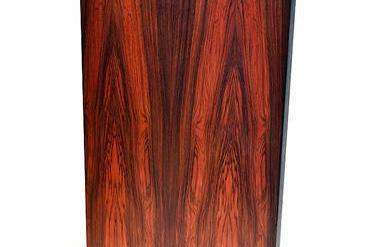 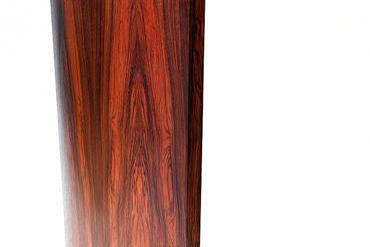 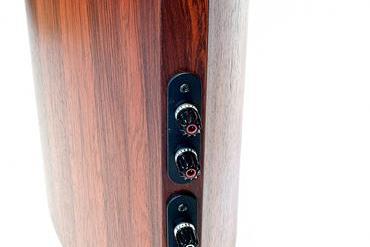 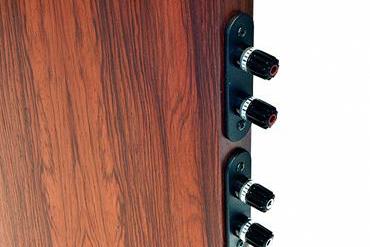 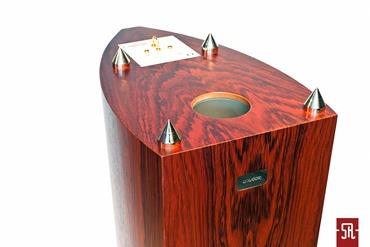 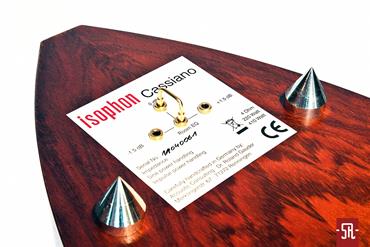 Despite the size of the box, especially its depth, which is easily noticeable, especially by the women amongst us, its shape, where the sides are curved and the back panel is almost non-existent, makes them very neat and fine looking. Achieving this shape was possible by using bent plywood and slit MDF. The free spaces in the slits were filled with about 9 kg of quartz sand. As a result of that, the loudspeakers did not lose any rigidity, while still having acceptable weight. The speakers were damped with Twaron, a special material, which according to the manufacturer dams all resonances of the cabinet while keeping a clean, transparent midrange and treble.
But the most important thing is protected by non-removable, dense metal grilles. Of course I am talking about the white drivers, made by Accuton, which are a kind of trademark of Isophon. A pair of the bass drivers, 18 cm in diameter, work in a chamber, vented to the bottom, while the midrange driver, also 18 cm, in a dedicated, but closed, chamber. As an upgrade, available while placing the order, or later as a modification of the speakers, the manufacturer offers a diamond tweeter as replacement for the standard ceramic one. At an extra price of course.
The difference in „class” compared to the cheaper series is also visible in the palette of available finishes. While the Arconas are available in only three versions (white and black piano varnish and cherry veneer), while Cassiano and its closes brethren (Vescova, Araba, Tofana & FRC) have 12 different veneers available, and the aluminum version can be varnished with any color from the RAL palette. More information is available in the company catalog, and if somebody would have an issue in recognizing the veneer of the tested speakers – it is Rosewood.
Like I already mentioned, the bass-reflex port is mounted on the bottom of the speaker, so I warn owners of fluffy carpets, that they should think about granite or plywood plinths to place under the speakers, or if they do not want to experiment, order the Flagstone from the manufacturer, as despite the mighty two-part spikes, the ports can be quite easily muffled what degrades the sound. On the bottom there are also shunts, that allow adjusting the amount of bass produced by the speakers by 1.5dB plus or minus. And now a few words about the wire terminals. Theoretically this topic seems not be very interesting, but we deal here with ‘moving terminals’. Please do not laugh. It is sufficient to look at the evolution of the Cassiano to understand what I am talking about. Initially, this model had no back panel, the side panels came together forming a sharp edge, so single terminals were mounted on the bottom. Next version, which I saw about four years ago, had a 4 cm wide back panel, similar to the tested model, which housed singular WBT terminals. And the tested units have double WBT-0708 NextGen terminals, which accept any kind of loudspeaker cables, starting with bare wires and ending with big spades, like the ones mounted in the Audiomica Miamen Consequence, which replaced “EU approved” terminals with collars preventing mounting of spades, known from the Arconas. But to be sure, I asked the distributor, and it turned out, that the reviewed pair was made to special order, hence the double terminals, which are only available as a paid option. Anyway, regardless of how you regard it, it is clear, that in Gauder development does not only mean bettering the products in technological terms, but also increasing their ergonomics, what means making the life of the consumer – the audiophile – easier. Bravo!

Being a happy owner of probably the first pair of the Gauder Arcona 80, which came to Poland, for about two years now, and having the opportunity to listen to the models Tofana and Berlina RC9 in comfortable environment, not even mentioning the RC11 which I heard a few times and was very impressed by them, I had some idea how the German speakers will perform. But, like it happens often, theory and life are two different things. Let us be frank – the Arcona series is the so called entry level for this manufacturer, and the Tofana and Berlina are the other end of its offering. So when I received the Cassiano, the first two weeks were used not really for getting acquainted with them, but for finding a sweet spot for their placement and burn them in. This because when you do not play ceramic speakers for some time, then they do not sound well. If we will have bad luck and get a “cold” pair, or one that was not really burned-in, then we can wonder, what High-End or Hi-Fi is about, when the sound is so edgy, matte and strange. In addition the so called company sound of the drivers is one thing and their implementation another. There are quite a few different constructions using ceramic drivers, and each one of them sounds different. As examples we can show the Gauder, which go in the direction of neutrality and limiting the coloring, and Estelon, which enchant with a dense, almost fluid timbre.
Finally the speakers found their place about 50 cm from the back wall and 1.2 m from the side walls, only very slightly bent-in to the listener. My room has about 20 m2. In addition, after a few experiments with the bass jumper, I came to the conclusion that the factory setting on zero is the best compromise between the wall crushing power, contour and masterful control. Granite plinths I prepared just in case, turned out not to be needed, as the loudspeakers placed on supplied spikes and washers worked well with my ash parquet, and during the whole test did not have any tendency to rumble or to lose control over the lower frequencies. So now the organizational part is over and we can sit down in the listening chair and concentrate on music.

The vacation with the Gauder Cassiano destroyed my peace, I built consistently for some time. They made my Audiophilia Nervosa, that was asleep for a few years, awaken and start to show me, that this time it will not get away easy, settled with some cable or another accessory. On one hand this is not a good sign for my home budget, but on the other it shows clearly the above average appeal and undisputable assets of the tested loudspeakers. Loudspeakers, which are not only backed-up with the knowledge and experience of one of the oldest, uninterruptedly working manufacturers of audio gear in the world, but offer also universality and opportunity to access the audiophile Olympus by adding diamond tweeters. Those black jewels can not only be just decoration to the beautiful cabinets, but also the end of the extended search for the audiophile Holy Grail, which is the individual summit to each one’s dreams.