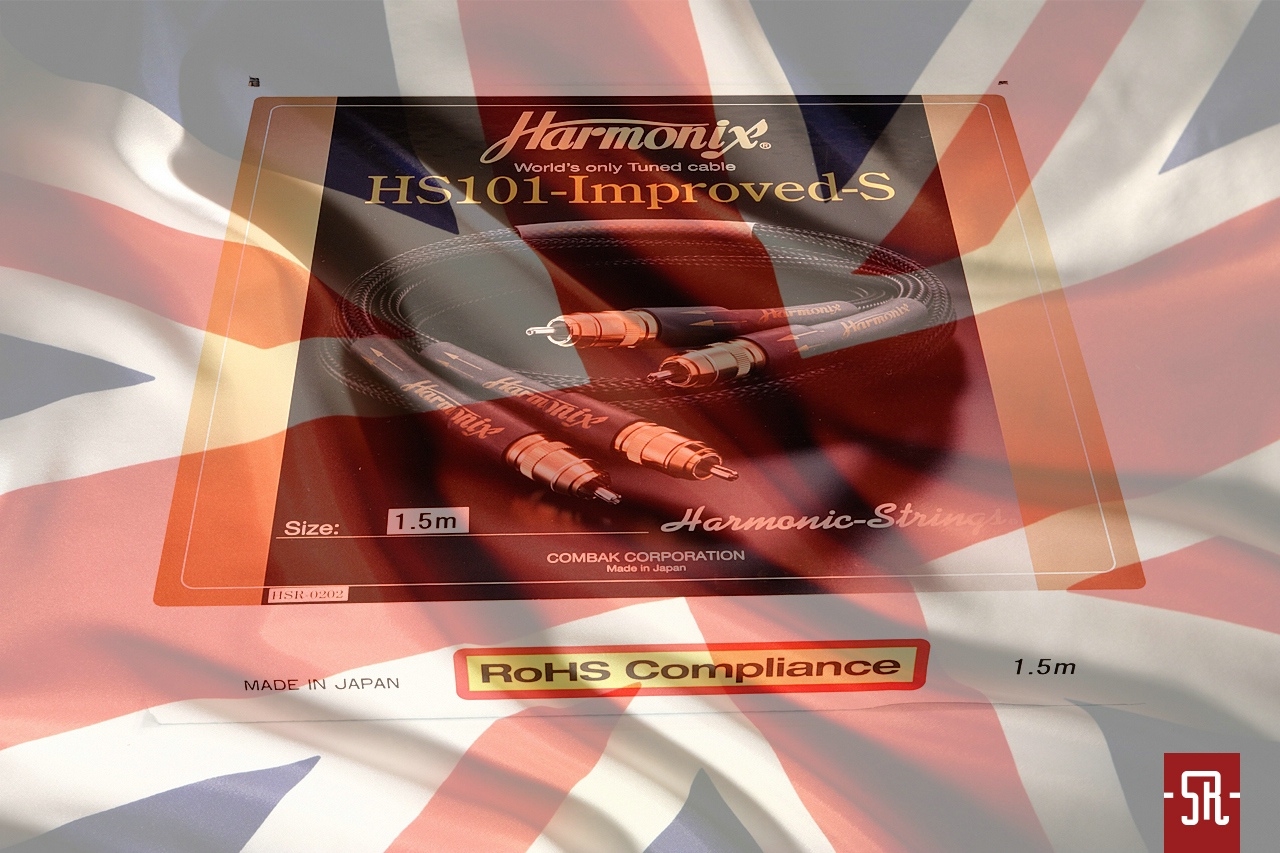 Owners of products made by Combak Corporation are among the happiest and calmest God’s children, at least from other audiophiles’ point of view. The reason for this is the stability, if not to say the immutability of the company portfolio. New models are introduced to market almost as often as political changes on Cuba. So the people who buy those products, even not looking at the ‘company sound’, have the comfort, that no newer, better model will appear anytime soon. Such approach of the manufacturer to the clients allows to maintain good relationships, and at the same time is a clear signal, that haste does not fit in High-End. 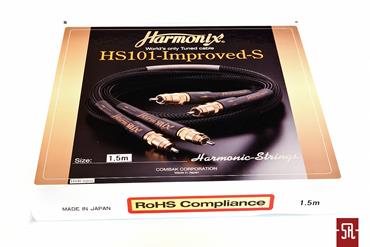 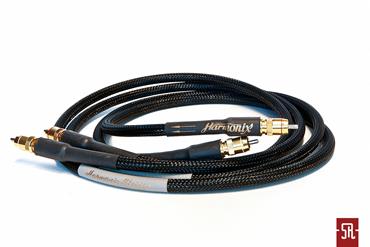 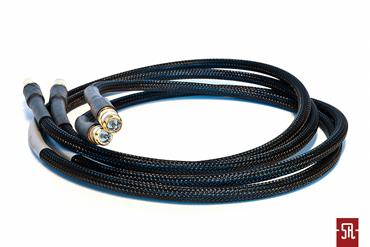 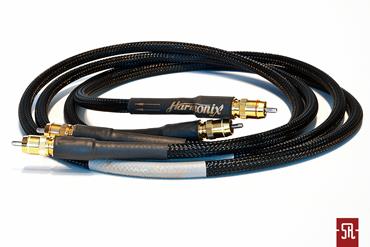 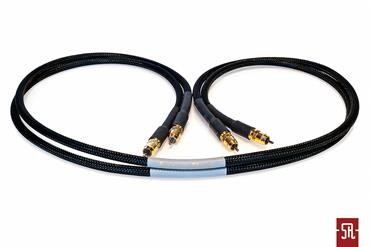 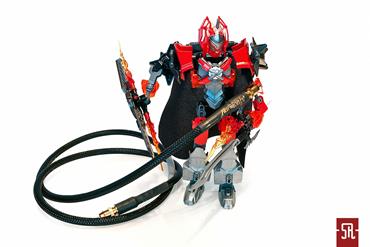 The tested cable is an analog interconnect Harmonix HS101-Improved-S, and finds its place in the middle of the Japanese manufacturer’s catalog. In the catalog we have the “budget” CI230Mk2 Improved and the top HS-101GP (“Golden Performance”). The budget and top designation by Mr. Kazuo Kiuchi does not need to cause any controversy, as the basic model was tagged with the price of 1700 zloty, while the top one … “merely” 6600 zloty (1550 euro). Before you start bashing me, I will just emphasize, that both descriptions are used in purely high-end aspect, because you cannot classify Harmonix and Reimyo otherwise. And when you compare this pricelist with the competition, then you will immediately understand what I am talking about. Another aspect worth paying attention to, is the manufacturing quality and attention to detail. However you will not find byzantine splendor in the HS101-Improved-S, no excessive sizing or costly, silk coated box made from exotic wood. Instead you will find timeless and never boring, modest elegance, without any signs of cost cutting, that could be used by cable-skeptical people as a weapon against the manufacturer, implying him avarice. The stylish, opalescent, black braid covers a quite ergonomically flexible wire, terminated with lockable, gold-rhodium plugs, allowing to adjust fastening force, and thermal jackets with direction markings. The presence of the thermals allows for proper installation, but this part of the cable becomes so stiff, that you need about 8-10cm of space behind the gear you want to connect, otherwise either the cable may be damaged, which is quite improbable due to the build quality, or you can damage the sockets in the devices connected, what is much more probable to happen.
Regarding the internal setup of the HS101-Improved-S we can write, that it is for sure well thought through, that it required very long and thorough listening and tuning. Yes, yes – tuning. It turns out, that the manufacturer tunes every part of the audio system, even such seemingly insignificant ones like cables, to his own, closely followed criteria, making sure that each set leaving the factory will sound exactly the same. The above assumption results in the fact, that different lengths of the cable may differ in some internal details, to compensate for the changed parameters influencing the sound. I think, that in this case I do not need to explain, that buying this interconnect we have something different, than just a piece of cable cut to length from a spool placed inside a nice braid and terminated with elegant plugs before packaging inside a nice looking box.

But let us move to listening. I mentioned the “company” sound in the very beginning, one that Harmonix worked out during all those years it is on the market. On one hand this allows to build a stable and faithful group of followers, while at the same time it is something allowing to stand out from the competition, as we should not fool ourselves – cables have an influence on the final sound of our systems, and only we are responsible for shaping it, depending on our preferences. The Japanese cables promote an incredible musicality and elegance of the sound. This does not mean they mask details or slit the sound. Nothing like that, but they have something in them, that at first, and also during longer listening sessions, we can perceive the sound as darkened, or more precisely, having a warmer timbre. It also far more complex we could imagine at first hearing. Offering some glitters of caramel sweetness they show the amber light of the sunset with an intensity unrivaled by any competition, even more expensive one. The midrange is incredibly dense and saturated, at the same time very resolved and selective, that there is absolutely no loss of micro-information about the texture enclosed in the precisely drawn sound contours as well as about the placement of the musicians on the stage and the acoustic environment present during recording.

However to reach such conclusions you have to meet one of the requirements below – received a burned-in set or be patient, and after purchase and plugging it into the system not listen to them for a week. Please believe me and remain sane. I received a brand new set from the factory, and that what came out of the loudspeakers initially could be described as an audiophiles worst nightmare – dull, matte and flat. A massacre. I think, that when comparing this cable to a metal hanger at that time I would choose … the hanger. Fortunately a reviewer usually has one or two devices not being used at any given time, so those could be used as burn-in gear. That was the case also this time and the Harmonix moved for a week to connect the iFi iDAC and iFi iTube fed with signal from an internet radio. After this interlude, the improved Harmonix sounded according to its capabilities, like I already started to describe above.
Starting with the blues-rock “This Life” Curtis Stigers opening piece of the “Sons of Anarchy” soundtrack and ending with the maudlin, build around a weeping guitar “Strange Fruit” from the same disc, my attention was drawn to the emphasis for reproducing the beauty of the human voices with as much naturalness and truthfulness as possible. True beauty, coming from reality, and not from any kind of beautifiers and better-makers, able to create a starlet from any talentless person. Here we come to a certain phenomenon associated with the tested Harmonix cable, which makes it possible for it to extract the best of what is hidden in our system, while not covering or masking the not so nice errors made during configuration of the system. If some component in our system would sound harsh, dull, not selective or just plain bad we will be informed about that by the Harmonix. This will be no nitpicking however, but rather a refined cue told on side. Like an advise coming from a respected person. The effect will be similar to the one achieved with shouting things around, but the form and way of delivering the criticism will be much more acceptable.
Despite the mentioned nobleness and sophistication the sound was not deprived from shine and openness of the treble. The ethereal sound of the sitar on “Traces of You” Anoushka Shankar was absolutely not damped and delivered an incredible amount of information recorded on the disc. For the readers knowing our private tastes, I can only say, that the sonic effect was in 100% conform with Jacek’s musical taste.
For the end of the test I left the repertoire, which has not much in common with higher culture, not mentioning easing down customs. The dark, heavy, dense and beautifully depressive “God is Dead” from Black Sabbat “13” showed, that even in such climate the HS101-improved is true to its soul. Absolutely no slowdowns, no thickening and muddy bass – this has positively surprised me, the recording remained juicy and bloody, having something in common with a muscle-car on neutral, capable of going into a race immediately. Looking for an even greater coarseness and increasing the tempo, I reached for the “Heavy Metal Music” Newsted, which has lots of the mentioned elements, and for the “Inhuman Rampage” DragonForce, full with absolutely insane rhythms. In both cases I had not much to complain about. Of course you could see the misery of the mastering. But in this case that was not the most important thing, as those discs were absolutely suitable to verify, if the tested cable is fit for heavy-metal rollercoasters. Harmonix did the job well, at the same time showing me some truly audiophile items, which I did not expect in the material played. Underlining the articulation of the vocalists, fluency of the guitar riffs, which were theoretically present in the material, the Harmonix finally showed those items in full splendor, allowing them to leave their hideouts and fight for their rightful place in the musical spectacle.

Looking from the perspective of time and devices tested while using this cable, I can absolutely recommend the newest version of the HS101-Improved-S to all people, who love high fidelity sound. In addition, buying this product seems to be a good future investment – even in systems worth astronomical amounts of money it should not be out of place and will not limit the potential of the electronics connected using it.

System used in this test: