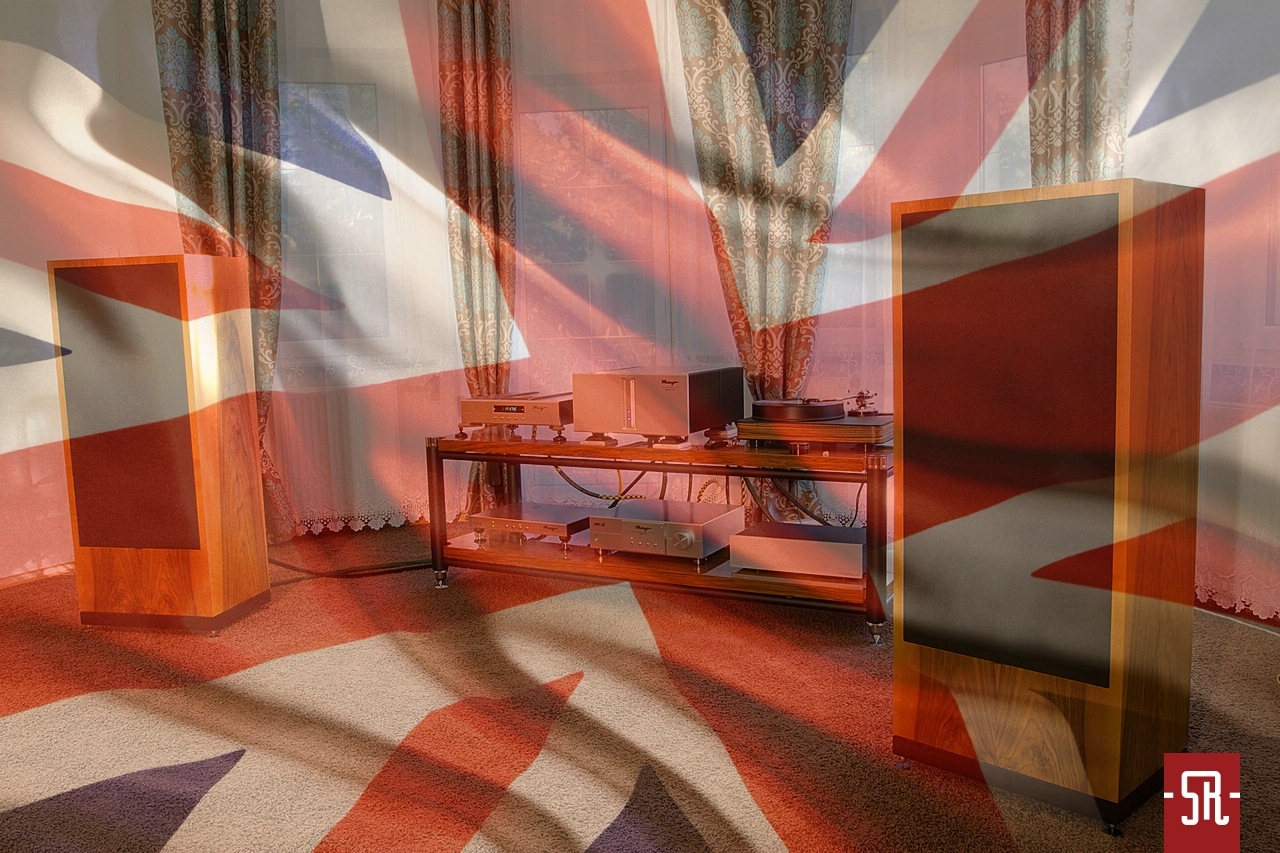 Every, at least slightly educated lover of good quality sound, who is looking for his Holy Grail of sound has probably an idea, what construction solutions should bring him closer to the main goal, the most natural reproduction of sound possible. During this meeting we will take care of the last element of the sound path, the loudspeakers. I will not hide from you, that in my audiophile searches I had a similar mindset. To be more precise, I had an idea about a very important part of a loudspeaker box, the woofer, the transducer taking care of the lowest frequencies. Seemingly it was a very simple thing to fulfill – 30cm diameter of the diaphragm – but it turned out to be very difficult in reality, because a true music lover does not expect a subwoofer type of “boom, boom,boom”, like the one you can hear from the trunk of a beefed-up, old BMW, but lower frequencies that carry lots of information. What kind of information? It is too early for conclusions now. Please follow me during this test, live with me the surprising meeting with loudspeakers, which had assets that moved the, to date untouched, foundations of the Bravo! Reference+ loudspeakers being part of my listening system. And I am talking about the “older brother” of the recently tested, splendidly looking and equally brilliantly sounding stand-mount speakers ART, the loudspeakers ISIS from the Austrian manufacture Trenner & Friedl, which occupy the second place from top in their catalog. Those speakers are distributed in our country by the Wroclaw based Moje Audio. 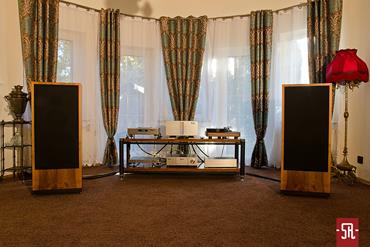 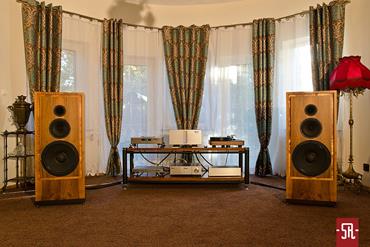 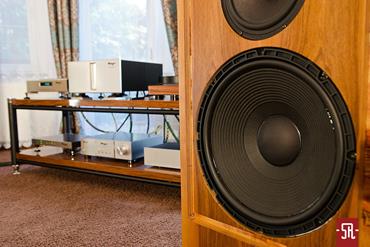 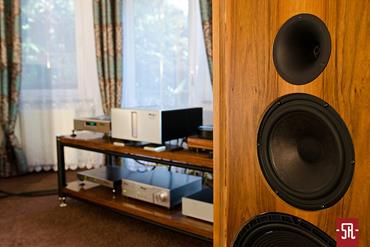 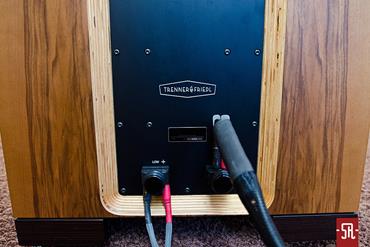 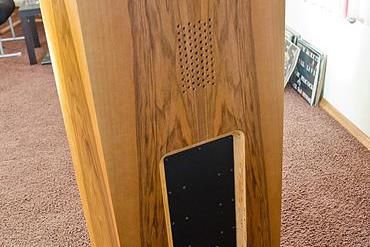 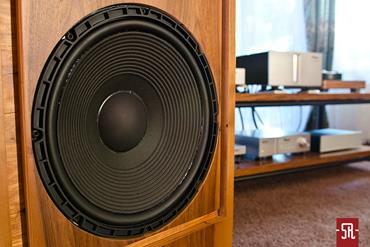 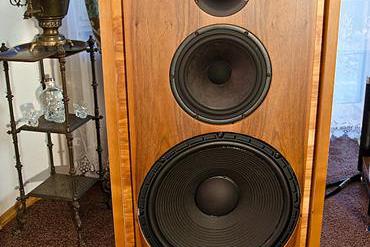 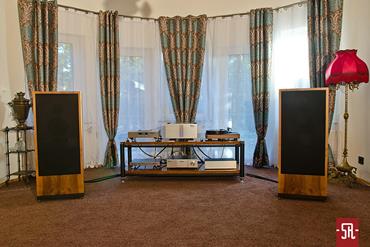 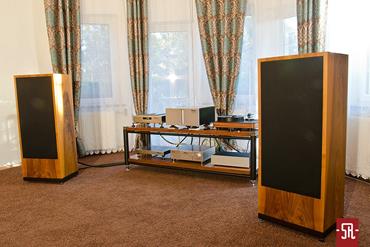 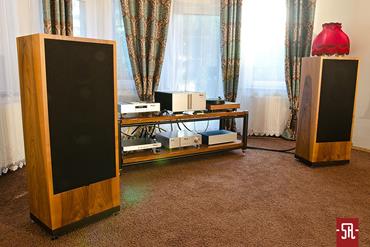 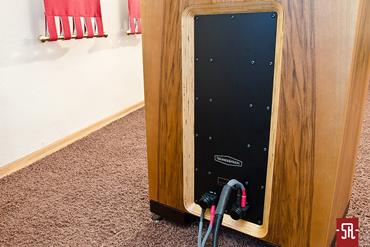 Following the first paragraph’s thoughts, the construction of the ISIS is quite strongly determined by the application of widely desired large diameter woofers, what can be the demise for our small, often hard negotiated with our wives, listening spaces. I mean, it is about the fact that we do know, where the “clou” of this audio game resides, but often our expectations shatter when confronted with reality. Do you think that I exaggerate? Then I will show you the facts. The tested loudspeaker is very wide (50cm) and this not for extending the internal volume to be able to generate some bass from many small membranes, but due to the usage of a single bass driver per speaker, but one with a diameter of 15”. It barely fits on the front baffle, and while there is also need to have some extra space for the grille, we come to the already mentioned half a meter of width. Unfortunately while taking this aspect into consideration, I think, that most audiophiles will not hear the beautiful and realistic sound coming from large diaphragms. But let us return to the tested speakers. Their cabinet is a masterpiece of carpentry using thick plywood. Of course there are two schools of knowledge about material for construction of loudspeaker cabinets: MDF and wood (in many aspects). But I will not go in depth about that. To try to mitigate the opposite sides, I will just tell, that the last layer in both types of cabinets is usually natural veneer, covered with more or less glossy varnish. After a few weeks of having those loudspeakers at home, I can say, that high gloss veneer would only be an eye-poking tinsel, and would not increase the visual aspect of the boxes at all, and that despite the fact, that I like ornate, however tasteful, finishes – but I thank the guys from Austria for using a natural hardwood veneer. Besides the paper bass driver on the front baffle we can also find a 22cm, also cellulose midrange speaker and a titanium tweeter mounted in a tube. Around those speakers there is a milled channel, which is used as the mounting point for the grille. The cabinets, with beautiful veneer, are placed on dark brown plinths, which add some ethereality to the whole, if we can call it that way. On the back of the cabinet, there is a rectangular block of holes, which allow the midrange driver to breathe freely, and below it a recessed, aluminum panel housing double Cardas loudspeaker binding posts. Also the internal cabling is made with Cardas wires. As an additional stability package, but also a sound modifier, we get a set of spikes mounted on the mentioned plinth with floor protection washers. Also for people, who do not have cables suited for bi-wiring, appropriate jumpers were provided. As extra care for the customers those large boxes were packed in even larger ones, that are constructed in such a way, that they may withstand a tropical typhoon. Austrian solidity in every detail.

When I received the call from the distributor, with the information, that he sees in me the second, and maybe the last person in our small audio world – I do not forget about Marcin, but I want to add some drama to this moment – who will be allowed to listen to and evaluate those speakers. However I had some concerns regarding how those speakers will fit into my system and into my expectations. The construction details I described in the first part of the text were rather raising the blood pressure than lowering it, because I did not know, how they translate into the sound. It often happens, that the masters we think of in our heads do not carry over into real life, either due to electrical mismatches or the influence of the listening room. I have to recall one such episode, albeit with some regret, where the second aspect was the reason of failure with my attempt to tame the Harbeth 40.1, so loved by everybody loving natural vocals. Even my true love to that company, the room I have was too small for them, what resulted in slight rumbling of the contrabass, what in turn erased the information generated by that instrument and posed a barrier I could not pass in my decision making. But as you all probably know, fate is like a cat, and goes its own ways, and after some time I got a second chance to evaluate a similar set of drivers (even with larger diameters now) in a much bigger room (over 120 cubic meters) and with completely different electronics. I waited for this, frankly speaking. This should be a nice ending of the many years of waiting, although I feared a bit it might also awaken the pursuit of the holy grail and become a disaster for my home budget. But let us get back to the main topic. 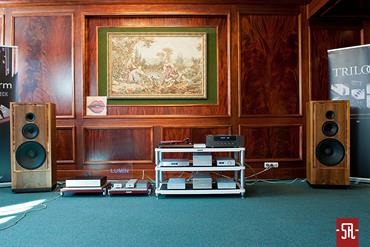 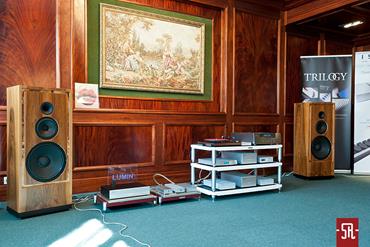 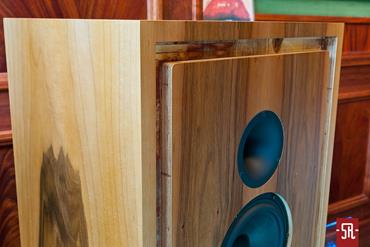 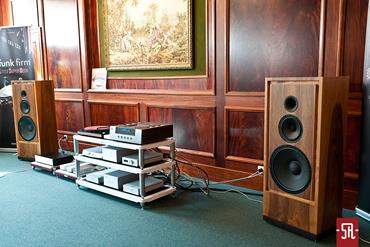 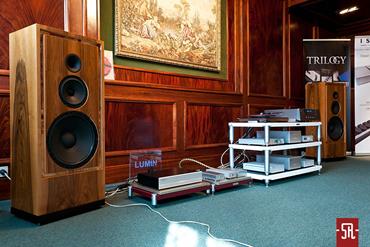 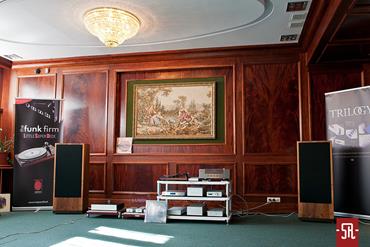 Did I write, that I liked the digital set? If yes, please forget about that, because now I know for sure, why I so much love vinyl, with all its shortcomings. However I will not try to impose anything on anybody by force. I can mention it, I can demonstrate it, let people hear it, but I will leave all the evaluations, all the pros and cons to the experienced listener. But going back to the ISIS I will say, taking full responsibility, that combining those loudspeakers with the antiquated playback technology is absolutely the most rewarding thing that can happen in the hard life of a music lover and audiophile. I combined those two (audiophile and music lover) on purpose, as the offering from the Trenner & Friedl brand allows to mate them seamlessly. Smoothness, definitely higher saturation and vinyl timbre profit very much from the used transducers, in my opinion besting even the most carefully mastered CDs, and that considering, that my digital set is going in the direction of vinyl aesthetics. I know that you can hear the diamond scratching the groove, sometimes ticks or cracks – continuous sizzle is an indicator of destruction of the vinyl disc by inappropriate usage or bad calibration of the cartridge and turntable, not a characteristic of the vinyl itself. The latter is perceived by the human ear as pleasant, the homogeneity of the sound gives us an impression of being fully compatible with the musical information coming from the speakers. Again, I will not talk too much about the supremacy of Christmas over Easter (or the other way round), but as an example I will call up a disc, which is seemingly very boring, as it features only two instruments. I am talking about the disc “Moonlight Serenade” of the duo Ray Brown & Laurindo Almeida, which played on a Dr Feickert turntable, that can be the starting point of the analog adventure, equipped with a fairly cheap Dynavector cartridge, immerges us in a vortex of the conversation taking place in the recording. Just a guitar and a contrabass can be boring, yet in fact the mentioned turntable showed a completely different aspect of this recording, involving the listener from the first to the last note. Both instruments use strings, but in completely different ways, and although those seem to be very well known, only with the help of the Austrian speakers I could extract their full timbre capabilities – especially the resonances of their bodies – as the information was amended with micro-details about their work. So in my opinion further digressions about the quality of sound of the tested set are pointless, and would only be tiring to the readers. This is the reason that I will leave you in this state of emotional exultation and finish my description at this point.

I do not know, how long I will remember those Austrian speakers, I just hope that it will be a short time – as this will be good news for my family budget – or maybe fate will decide differently. This is the first time, since I completed my system, that I have such strong thoughts about exchanging the speakers. A big argument not to do so, is that my listening room is too small for those speakers, and as I did not carry those weighing over 60kg boxes two stories up, I could not prove the opposite. What if they could handle the bass in my octagonal tower? This was strongly suggested by the co-worker of the distributor, who placed the speakers on the floor without applying the spikes. I do not know and I will not check it, because – let me name it as it should be named – I am afraid. I will probably regret this, as the wealth of information, impulse reaction speed and strong lower registers without even the slightest signs of sounds merging together are exactly the things I expect from well made, ideally tuned loudspeakers fitting into my sound aesthetics. If somebody would like to try out similar constructions, utilizing a 15 inch woofer, this should never be left out. This adventure should be lived through. If a stereo system, that such speakers should accompany, is at least somewhat refined, then this combination may be one for life. All attempts of “I will listen and give back” may be really disastrous, as they might cause lots of unfulfilled dreams. I just have one.

The system used in the test, a complete set of Combak Corporation.