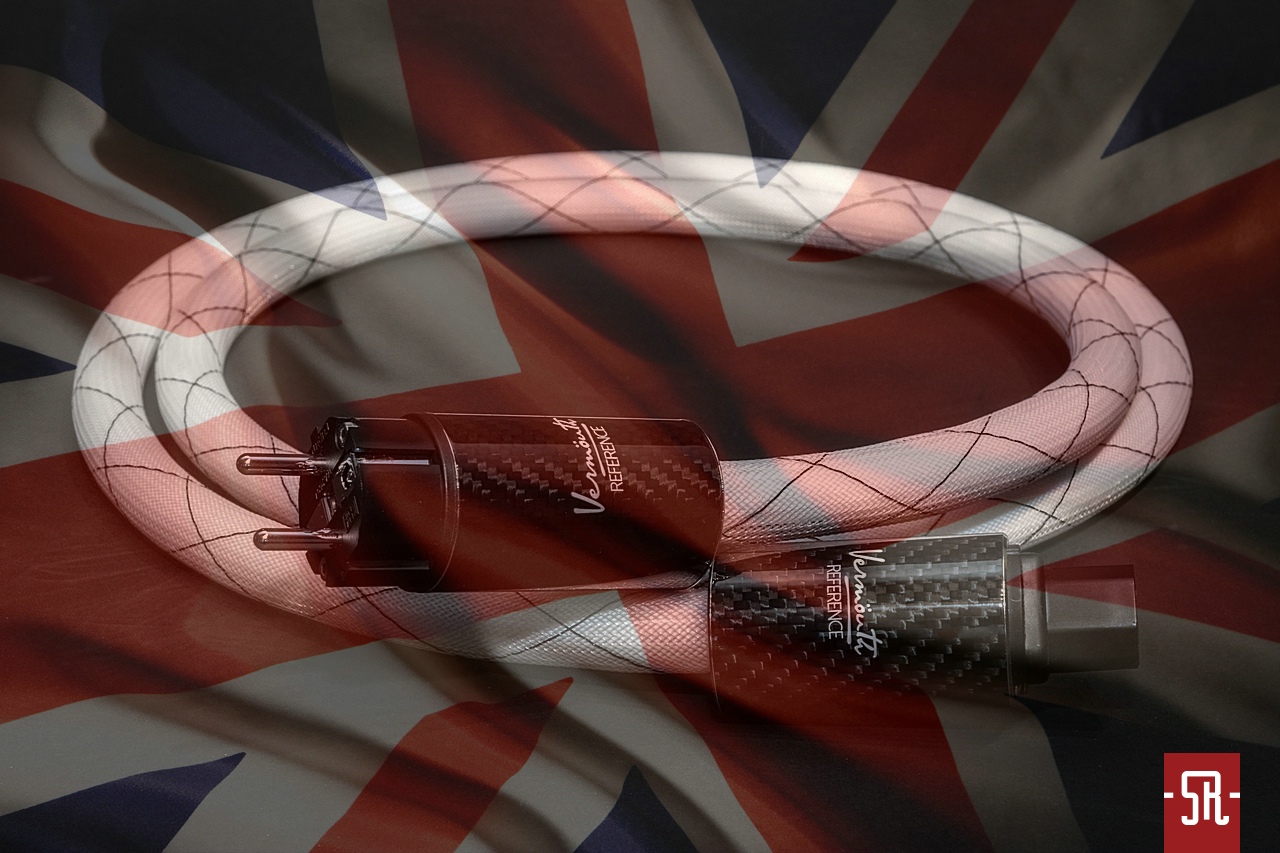 Continuing our energetic exploration, in today’s review we will concentrate our attention on an essential accessory, absolutely necessary for most electrical devices to operate. We are, of course, talking about the power cord, but not an ordinary power cord, usually called the “computer power cord” and included by manufacturers of Blu-Rays, TVs, and other electrical equipment to make them work – but an audiophile cable, dedicated to audio and manufactured based on measurements and, maybe most important of all, based on listening sessions. People, not infected with audiophilia nervosa, categorize such cables into those that work and those that don’t. However, for the self-aware and listening devotees of Hi-Fi and High-End equipment, the mere fact of conduction is not success in itself, but only the starting point for further discovery and tiring experiments. This is the path taken by Hendry Ramli, the person responsible for giving us hands-on experience with another cable coming from the Indonesian manufacture, Vermöuth Audio – the top power cable called the Reference Power Cord. 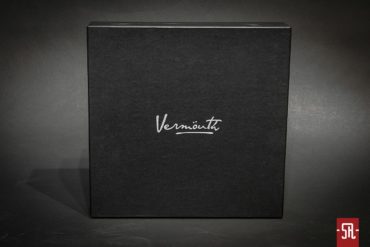 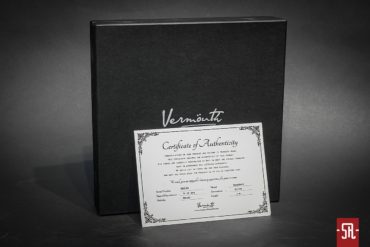 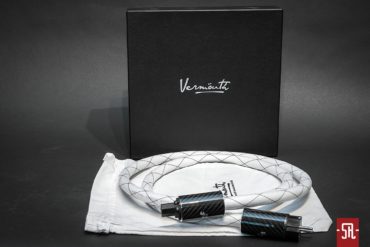 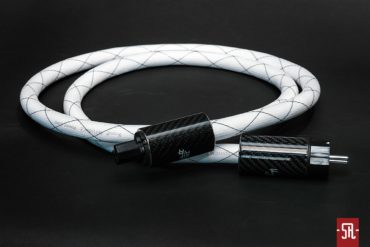 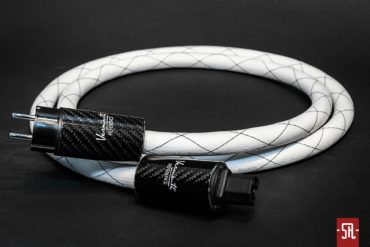 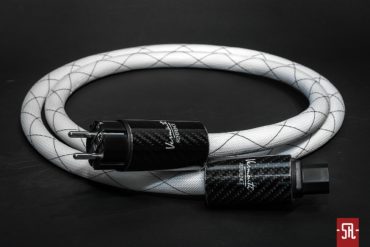 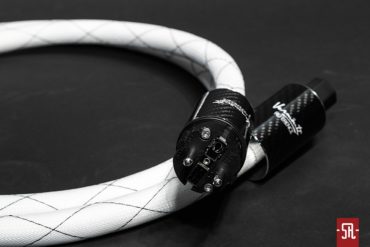 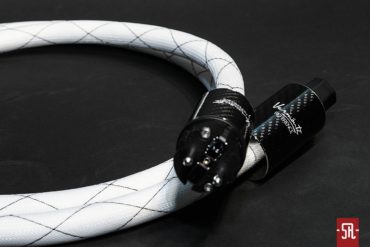 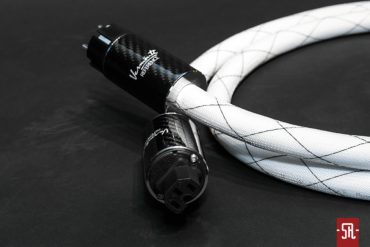 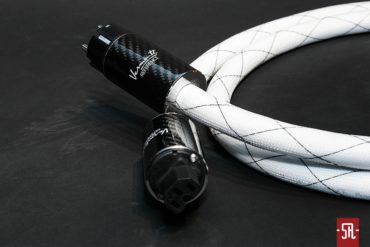 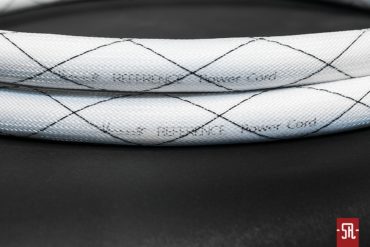 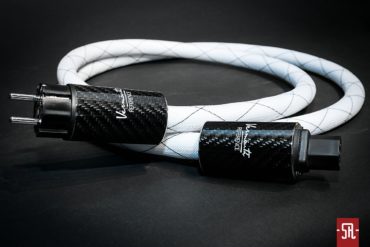 Similar to the XLR and RCA Reference interconnects we reviewed earlier, the cord currently being tested, although designed by Hendry Ramli – the founder and only employee of Vermöuth Audio – has its origins in the Wanlung Taiwan company, one of the four OCC conductor manufacturers in the world. And the Reference themselves are made from 39 twisted OCC wires with different cross-sections with a cumulative diameter of 10 AWG wound around Air Tubes (PE tubes filled with air). The whole is placed inside an aluminum mylar cover and protected with a woven shield, around which the company’s trademark white PVC sheath with a single black thread is placed. The plugs come from Furutech, models FI-28 and FI-38, modified by the manufacturer and equipped with characteristic carcasses made from carbon fibre. The cables are supplied in elegant, yet modest, cardboard boxes protected from the outside world by a linen purse. A certificate of origin is also included.
Moving on to the sound, I will just mention at the beginning that the cord received for testing was factory new, so I gave it time to work and settle down in my system for two weeks before starting to listen to it normally. Going into detail, the Vermöuth Reference Power Cord represents a surprising, yet very successful combination of a certain darkening with an increase in resolution. Do you notice this obvious contradiction? How is it possible that the slider with brightness moves to the left and the number of perceivable nuances and microdetails increases? Well, in Hi-Fi, and especially in High-End, theory does not always come together with practice or reality, so instead of thinking how this could be possible, I would suggest that you just take it for granted. In addition, this effect is not reached in a way that could be called “night vision”, where the picture shows even more than Egyptian darkness, but it has a big flaw – it becomes monochrome. However, we cannot blame any kind of desaturation on the Vermöuth power cord, so we are faced with the effect of a transparent lens and a highly sensitive sensor, but this also is not the complete picture. Why? With full aperture, the depth of focus is very “paperlike” (only a few millimetres deep) and sensors with a high ISO tend to have high noise levels. And the Indonesian cable not only has a brilliant insight into the depth of the musical stage without any issues with the gradation of planes, but also has incredible precision in creating the virtual sources including the definition of the tissue filling them and their contours.
Interestingly, to experience this you do not need to plough through the audiophile and extremely beefed-up catalogues of Fone or Fim Records, as even the “commercial” album “Fortress” of the surprisingly not so popular, amongst the golden eared, band Alter Bridge was able to demonstrate everything I just mentioned. The bass was incredibly tight and reached places where even Lucifer does not want to stroll without a flashlight, while not losing anything from its control and differentiation. So at first it might seem that there is a tad less of the lower frequencies when compared with the competition, but in direct comparison the truth will surface. Similarly, a positive surprise comes from the upper parties, woven from guitar riffs, where shine is accompanied by resolution and crystal cleanness.
Of course, with a somewhat more refined and, at the same time, non-electrified repertoire, such as, for example “Tartini Secondo Natura” of the Tormod Dalen, Hans Knut Sveen and Sigurd Imsen trio, such nuances come across even better. The aura surrounding the musicians can almost be cut with a knife, and the present calmness spreads around the listener with only the first few notes played, while the juicy and, at the same time, rough timbres of the instruments used during the recording session are remembered as intensively as your first (successful) date. Looking for some cable reference points, more widely recognized by our readers, I would claim that the apparent darkening of the Vermöuth has a lot of the density known from 聖HIJIRI ‘TAKUMI’ MAESTRO, although regarding resolution it comes closer to the flagship Furutech NanoFlux-NCF. A most noble company, would you not agree?

Vermöuth Audio Reference Power Cord is another example of the saying that if you want you can and to enter the market with a strictly High-End product, you only need to have an idea, the knowledge to make this idea work and a solid subcontractor, who can offer appropriately refined technology. Because it is worth remembering that Vermöuth Audio is, in fact, only Hendry Ramli, who is stubbornly following the path he has chosen, and has now reached a point where one starts to hear about his cables more and more. I wish there were more such passionate people in High-End, and then it would regain its human face, after the era of corporate consolidation, as well as, hopefully, more “human” prices. And I wish this to all of you, myself included.

I am absolutely certain that a few weeks ago, before we tested the RCA and XLR interconnects Vermöuth Audio Reference, the word “Indonesia” would only conjure up a destination for exotic vacations. Yet, as can be seen from that test, it houses a brand which offers audio cables with a fantastic price/performance ratio. I explained the genesis of our cooperation with this quite exotic company, from our country’s point of view, in the previous test, so I will not go over it again this time, but, with a lot of satisfaction, I would like to invite everyone interested to read a few sentences about the sonic abilities of the Vermöuth Audio Reference Power Cord, which finally reached us after some logistical acrobatics. 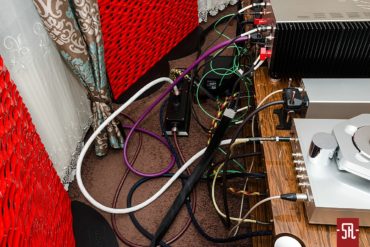 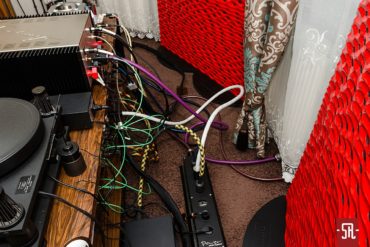 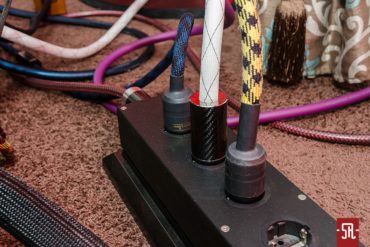 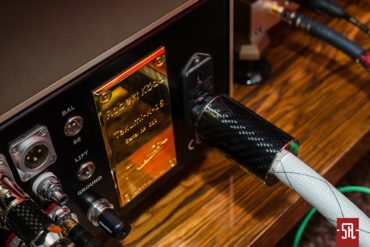 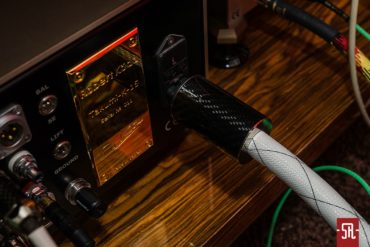 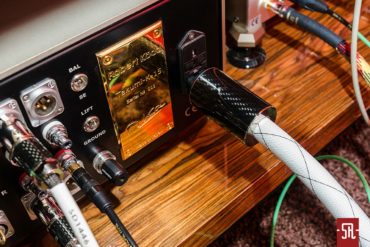 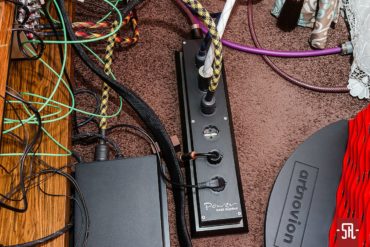 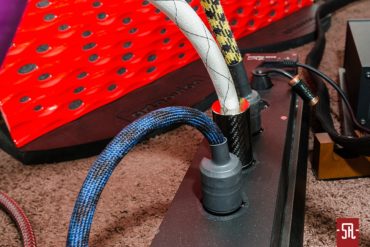 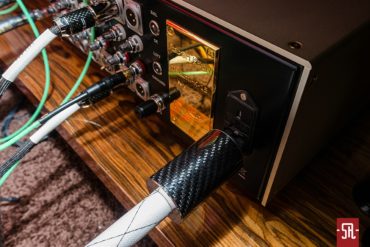 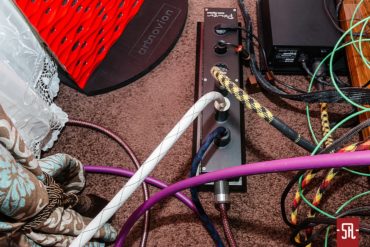 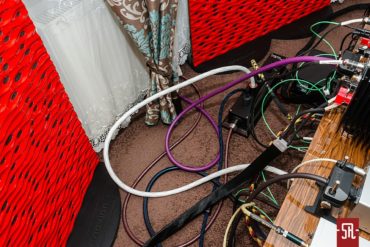 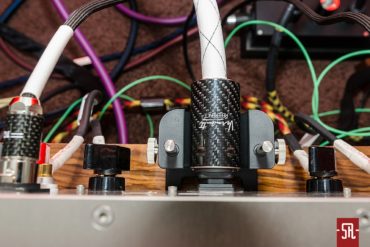 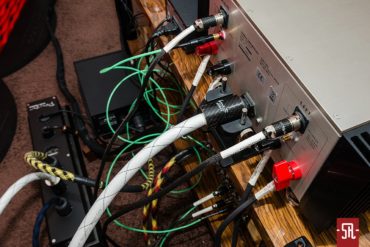 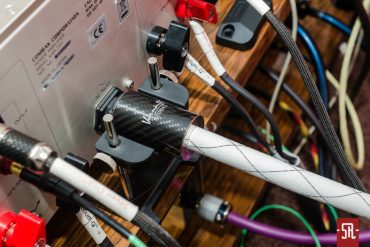 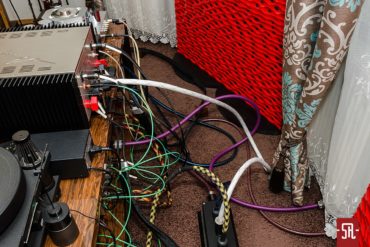 As you can see in the pictures, this power cable has very similar looks to the signal cables. This means that the conductors of various thicknesses, braided according to a proprietary specification and made from UPOCC copper, were inserted into a white sheath with a dark – grey thread. But the final elements of similarity are the very long, proprietary, carbon fibre plugs based on the FI-28 and FI-38 from Furutech. Also important, in this age of making cables stiffer using external isolators, the Power Cord is quite flexible, so it can be used even in very difficult housing conditions, which can be a breath of fresh air for music lovers with small rooms. This nice cable is placed into an ecological linen purse and, together with a certificate of authenticity, packed into a nice cardboard box.

I might surprise a large number of you but, according to my observations, the influence on the sound of the tested cables is a bit different than both signal cables; it emphasizes different aspects of the sound. But, at the same time, it does not turn everything we know upside down, it just makes a few corrections to what the other cables have already demonstrated. What corrections? Well, after plugging the Power Cord into my system, the lower part of the sound spectrum changed. It was still energetic, but it clearly came together, which generated better timing of the reproduced music, while keeping the stage airy. I think I do not need to defend the thesis that all genres such as hard rock from the Percival Schuttenbach, or John Zorn Free Jazz gained with that. But, as often happens in life, there is always something you have to pay for that change and I need to tell you that the bass contours, being improved without any incursion in the midrange, pushed the sound of my colourful system in the direction of neutrality. But I want to put at ease every user of cables coming from this brand, who might have suspected a coup d’etat, that those changes are very delicate movements, not really influencing the general presentation. The ideal confirmation of this is the fact that when I enjoyed my beloved repertoire of music for the soul, with representatives of church music, such as Claudio Monteverdi, I did not detect any side effects. So what is the conclusion? Can we bring together speed and never ending decay? Yes we can! At least when using Vermöuth Audio cables. How is this possible? The key is the breath built into the events taking place between the speakers. The Indonesian cable was able to keep the freedom of the individual sounds in the ether, while keeping up good saturation and tight bass. This translated into playing with swing when the material demanded, but in places where you needed to celebrate each note, it did not smother them with the upcoming chord. I do not know how they were able to combine those things, but this is how I perceive those several weeks of playing with the Indonesian Reference Power Cord plugged into my preamplifier or power amplifier.

An analysis of the above text makes it possible to draw very clear conclusions. In the case of the Vermöuth Audio Reference Power Cord, we are dealing with something a bit different than the interconnects, but still in a very similar esthetics of sound. We consistently feel a lot of breath in the music reaching our ears, and the only aspect which seems to bring corrections is the slightly less perceptive influence of the midrange in the whole sound, together with a slight shortening of the bass. But, as you can see from the articulated nuances, the subjective perception does not lose anything with that. Yes, the centre of gravity moves a little. But the overall joy of listening to the decaying notes with better timing of the whole means that even in the case of perceiving this as something different at the beginning, at the end it may pose an even truer viewing point for many music lovers and not just a way of trying to convince listeners to one’s point of view. Impossible? Well, the final verification is up to you, and I really encourage you to try this cable out.