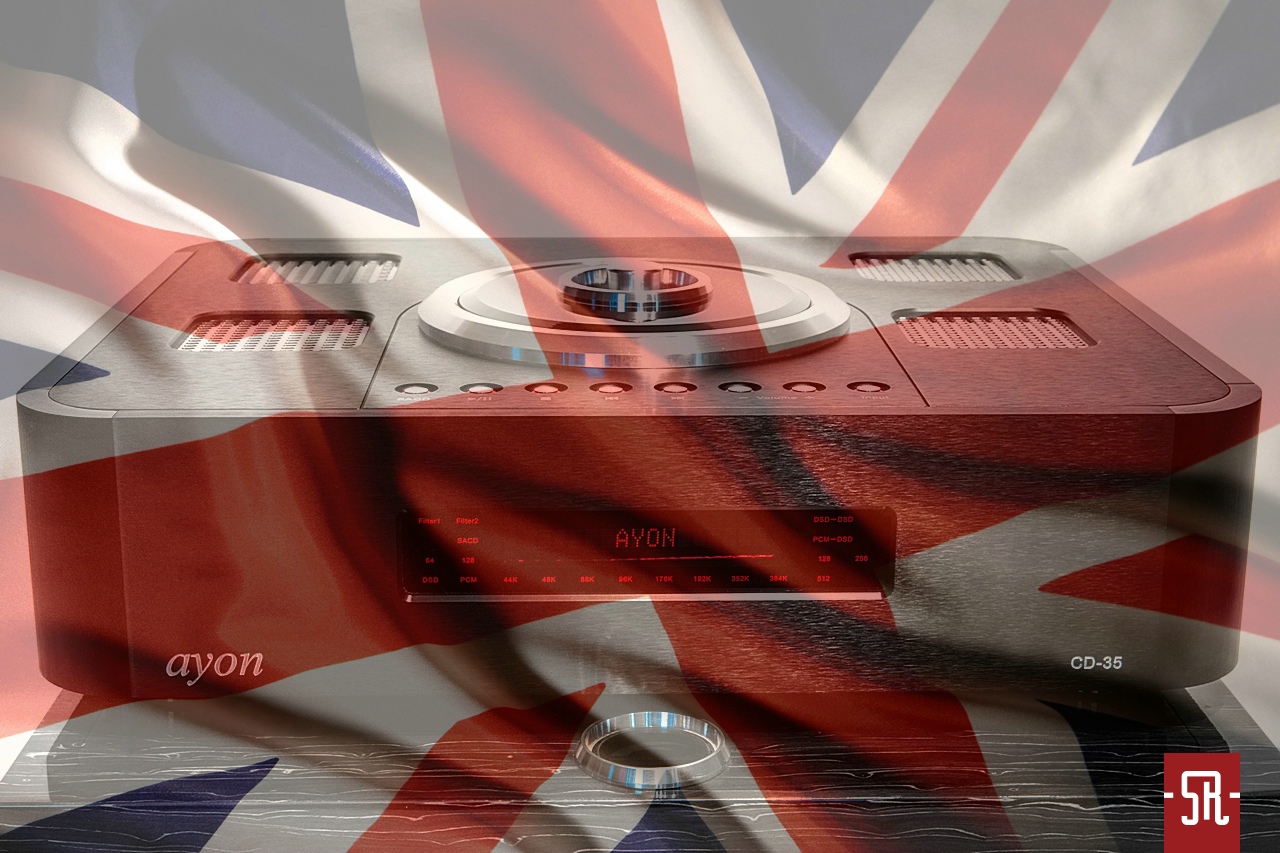 Despite rumors about the death of the CD format dwelling around for some time, the silver disc does not care about them and still holds its position. Although sales are going down slowly and new issues are selling better on vinyl and as files, or in streaming, but we cannot deny, that there are hundreds or even thousands of Red Book compatible discs in our home libraries, and we will for sure keep on listening to those. So it might be the case, that during the coming years, our libraries will not grow as quickly as before, but we will still be interested in extracting the best of what we have already stored. Of course you can pour out the baby with the bathwater and like Linn stop manufacturing players capable of reproducing music from the silver disc (they still manufacture turntables though), yet continue to propose music on such carriers, which is not a very consistent approach to the topic, is it? Another, and much less controversial, idea on how to stay on the market is to induce the buyers emotions and suggest, that if you want to buy a CD player, then it is the last possibility to do so and later it will be to late … and introduce to market the (last) Mohican, like the Norwegian Hegel did.
But there are such manufacturers, who did not scrap anything, they do also not foresee the end of the world as we know it or pronounce digital apocalypse, but just want their newest products to combine the past with the present and the future. To this last set of manufacturers we must count the Austrian company Ayon, which’s owner – Gerhard Hirt, carefully observes the changing reality we live in and draws conclusions from it, from time to time putting the cat to the pigeons when presenting a new product. And this is exactly the thing we deal with now. Ladies and Gentlemen, let me present the Ayon CD-35, the “all having” CD/SACD player, DAC and preamplifier, introducing the fourth generation of Austrian players to the market. 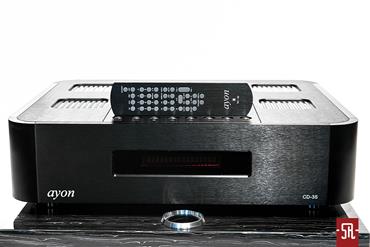 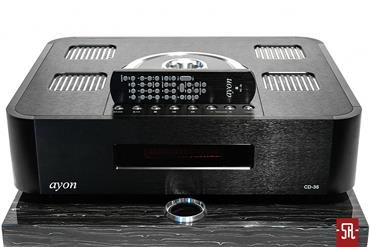 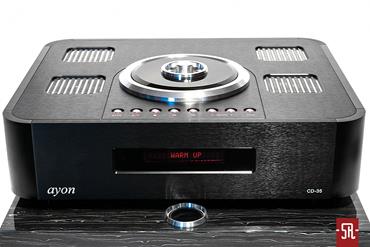 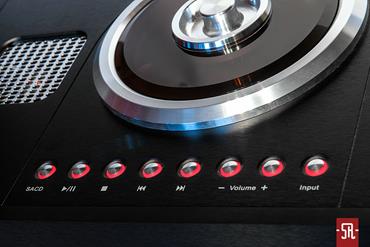 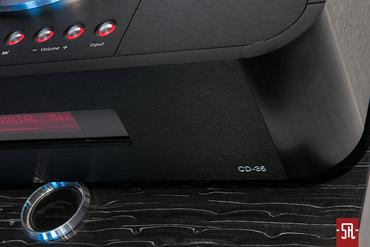 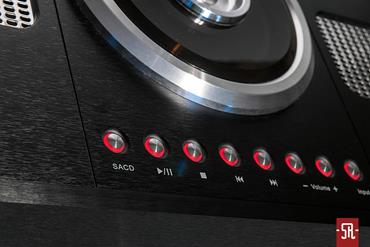 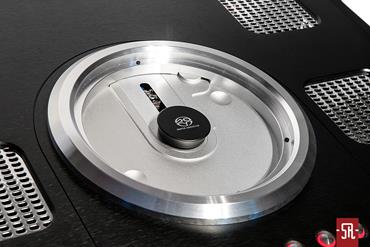 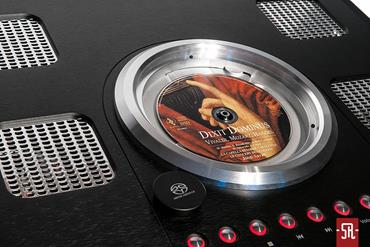 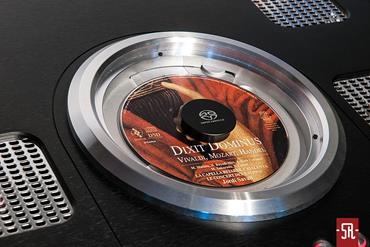 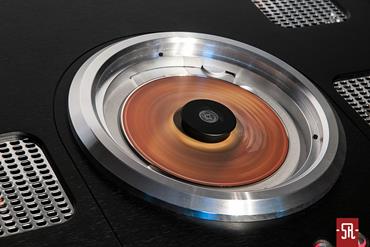 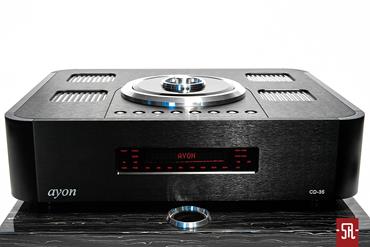 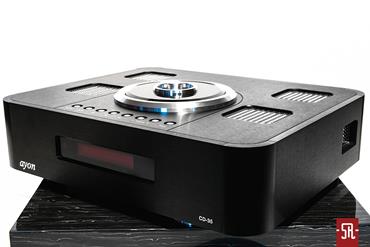 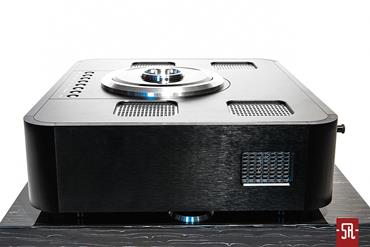 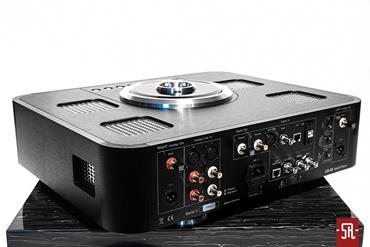 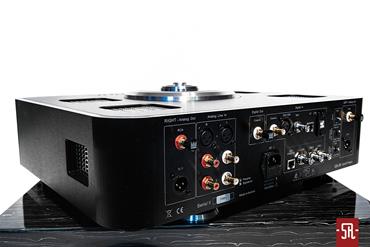 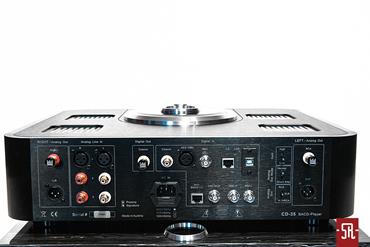 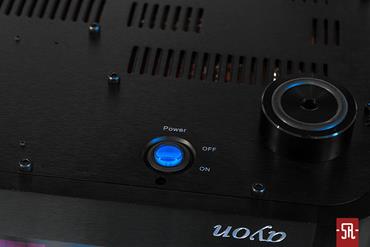 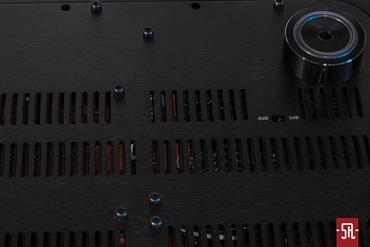 Concentrating on the design of the CD-35 it is hard to add anything to what was already said, written and seen during the tests, listening sessions and touching of the previous models. Because you do not change things that is absolutely immediately recognizable, and in addition, due to the really armored build quality, also sympathy of its customers. This is the reason, that we have again the same kind of chassis, with rounded edges, and made from perfectly matching aluminum profiles, with a top-loading mechanism covered by a massive acrylic top.
Inside the chassis we have some tubes, not only in the output stage (one 5687 and 6H30 per channel) but also in the power supply (rectifying GZ30), so we should not be surprised, that there are venting holes in the plating, secured with silver plated grates. Talking about things we can find inside the player, I will just mention, that this time the DAC chip is the AKM “Verita” AK4490EQ, which provides support not only for PCM 768kHz/32 bit, but also DSD 256 (11.2MHz). Power is supplied by two R-Core transformers, one of which is dedicated to digital circuitry. Additionally the Signature version, we received for testing, is equipped with Mundorf Silver/Gold capacitors. But most work and time went into the programming of the unit, the creation of the firmware by StreamUnlimited took almost three years.
Going back outside it is worth mentioning, that besides the acrylic top, the disc is kept on the drive by a small and light magnetic puck, covered with the SACD emblem. You can also see the name of the format on the top, near the navigational buttons, which are traditionally placed there.
The front panel, as usual with the Austrian top-loaders, has only a centrally placed, red, display, the company logo on the left and the model name on the right. Full minimalism, not even distorted by the power switch, as this is located on the bottom, close to the left front foot. However no restrictions are to the back panel, which overwhelms with the amount of available connections and functions. So we have analog outputs in RCA and XLR version, a section of analog inputs, where instead of three RCA pairs like in the CD-3sx there are two such pairs and a XLR pair. There is only a single coaxial digital output, but there are a lot more digital inputs. We can choose from a coaxial, AES/EBU, BNC, I2S, USB and triple BNC dedicated to DSD. There are also dip switches allowing to select gain (high/low), input stage mode (Normal/Direct Amp) and the analog output mode (RCA, XLR and XLR/RCA). However the good news ends there, as I noticed that the unit is lacking a characteristic red LED, an indicator of proper polarization, something that is very helpful when reconfiguring the system. The manufacturer informed me with grief, that this was the result of implementing the EU law, or more precisely, the CE certification. Although it seems absurd, it turned out, that the EU bureaucrats decided, that this sensor, which operates on 230V, may pose a risk for the user. Incredible! What do you need to have between your ears to think of something like that? I do not know, what the bureaucrats responsible for the certifications are taking, but they should change their supplier quickly, as they may come with the idea, that a disc rotating in the drive also poses a deadly threat.
To dry our tears we get a few very useful functions, among which we need to distinguish the sixty step volume control done in the analog domain, which can be bypassed with one click of a button on the remote. There is also a choice between two available filters – with shallow slope (Filter 1) or steep slope (Filter 2) and upsampling of all signals to DSD 128 or DSD 256. There are also two switches hidden from full sight, located on the bottom plate, which allow to lower the output signal by 6dB, what can be welcomed with joy by people, who found the Ayon players being too loud compared to competition.
Before we continue to the part devoted to the description of the sound I would like to turn your attention to one thing. Unlocking the ability to read SACD discs resulted in the drive becoming much more noisy. This is not unexpected, as the CD rotates at a moderate 200-500 RPM, while with SACD this increases up to 1500 RPM. And this is something you can clearly hear. Interestingly when we tested the conventional drive C.E.C TL 0 3.0 this could be heard even more clearly, while the hybrid Accuphase players operate completely noiseless. On the other hand no one is sitting with his ear on the chassis, as this would not be very sensible, and furthermore you would probably burn your ear, as the unit gets significantly hot.

This time I want to mention upfront, that this review will be very subjective (as if the previous ones were not), but in addition it carries the burden of my over six years of “marriage” with players from the Ayon brand. But if you would think I always tackled the upper shelf of the catalog, then you are mistaken. When in 2011 I started my “romance” with Ayon players, then when I got to choose between the CD-07s and the CD-1sc, I consciously chose the 7, as I liked it better. The 1 sounded better, but the 7 enchanted me with incredible musicality, for its price. However this state did not last long, as on the turn of 2012/2013 the new version of the 1sc changed my mind completely and I replaced my player with that model. For the next two years there was a certain quiet, but in February 2015 I invited the CD-1sx  which lasted until I got for testing the CD-3sx, the top model at the time (January 2016). This sparring turned out very interesting, as both models were from the third generation, the last one at the time, so the spotted differences were to show, where the evolution will go further. Or to cure my audiophila nervosa showing, that this is more a step sideways than forward. But when I became enchanted with the volume of the sound, resolution and nobleness I could not achieve in my player, and I was thinking about another change, I heard from the manufacturer to wait. I probably do not need to tell you, that this patience was rewarded, although my beginnings with the CD-35 cannot be described as nice and easy.
My first contact with the player was during the opening of the new Warsaw Nautilus shop, but listening there was absolutely not possible. Another chance was during the Audio Video Show, but meeting with people made listening not really possible. Fortunately things got better from there, and almost the complete set that was showcased during the Audio Show  arrived in our listening room (minus the turntable).
The first listenings we did with Gerhard Hirt, who was so kind to visit us in person, we ended around 2 am, and next sessions made me more and more convinced, that the 35 sounds worrisomely good. Comparisons with the company streamer S-10, but also with our separated source Reimyo, only confirmed that, so after a few days, when the CD-35 was borrowed to our competition, I plugged it into my system and … I was completely sold. The CD-1sx was good and I liked it, especially as it was my fourth (I believe I had two 07s) Ayon player in a row, but it had to acknowledge superiority of the CD-35, as it was the case with the CD-3sx. However with the 3 I was thinking very hard about the change, here with the 35 there was absolutely nothing to think about.

Although due to its multitasking nature the Ayon CD-35 should be performing each of its functions more or less good and be very well perceived against competition due to this multitude of functions, called universality, yet in reality things are a bit different. It turned out, that Gerhard Hirt had enough time, when working on the fourth generation of his players in the form of the CD-35, that each of the available options was brought to perfection. What does this mean? I do not know what you think, but for myself, I can say, that due to the Ayon we might become not only witnesses, but also the main role players, of the exhumation of the CD discs, already buried by some. You do not believe me? Then please listen for yourselves. But please do not blame me, if your plans of limiting expenditure on audio gear just got shot.